Appearing in Far Cry 3, the 1911 is an American-made semi-automatic handgun chambered in .45 ACP. It has no attachments, and is unlocked at the start of the game. A customized variant known as the Shadow can be unlocked later in the game.
"A classic .45 caliber semi-automatic handgun that can be used while on a Zipline. It is a solid all-around performer at short range, and can be fitted with a sound suppressor.[sic]"

"Talk about a classic as American as apple pie and immigration fences, this .45 caliber semi-automatic pistol has been in use worldwide for more than 100 years. Fortunately, the ones found on Rook Island aren’t cheap Chinese knock-offs. These custom 1911s purchased by a local big shot for his private army are virtually identical to those used by some U.S. Special Ops teams."

The 1911 is a handgun in Far Cry 3 and the first obtainable firearm in the game, costing only $60 and capable of being purchased as soon as the player arrives in Amanaki. It replaces the role the Star .45 filled in Far Cry 2.

The 1911 sports moderate damage & accuracy, and a quick reload time, but a small magazine size. It is the only pistol that does not accept attachments, but can be customized with skins. It can kill a regular enemy in roughly 3 to 4 hits, but is, like most handguns, a bad choice for hunting large animals. Its biggest drawback compared to other pistols is that it cannot be suppressed, while the 6P9 can be fitted with a suppressor. 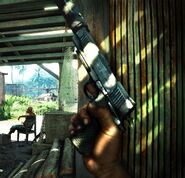 The M1911 being leaned against a wall in a pre-release screenshot (note the suppressor).

Iron sights of the 1911.
"A customized 1911 with a larger magazine, silencer, and custom paint. Enhanced for accuracy and stealth."

The answer to the problem of the 1911 not having attachments, the 1911 "Shadow" features not only a suppressor, but an extended magazine and a red dot sight as well.

It becomes available for purchase by liberating 17 of the Outposts in the game. The Shadow is quite expensive, being priced at $2,600 in the gun shop. It has a much higher accuracy than the standard 1911, almost reaching that of a sniper rifle. This, and the included silencer and red dot sight makes it perfect for silent and quick kills, even at medium range.

First-person view of the Shadow.