The 6P9 is a handgun that appears in Far Cry 3, Far Cry 4, Far Cry 5, and the expansion pack Dead Living Zombies.

"This small calibre hand gun is ideal for stealth when fitted with a silencer[sic]. It is exceptionally accurate at close range and can be used while on a Zipline."

"This Russian pistol first showed up in the groovy 1960s, designed by the not so groovy pinko (pardon my French) Spetsnaz. Those on Rook Islands come from a batch of surplus arms sold to local pirates by a general looking to fluff up his retirement fund and his sex life. The deal included hundreds of 6P9 handguns, extra parts, ammunition and one thousand hookers... a day."

The 6P9 appears Far Cry 3. While the weapon can be purchased for $680, it is much easier to unlock it at the start of the game by liberating the first Radio Tower outside of the village after being rescued by Dennis Rogers.

The 6P9 is a compact 9x18mm pistol, and can be equipped with a suppressor, extended magazine or night sight. It has low damage, high accuracy and an 8-round magazine size. However, the pistol can only equip 2 attachments at once, making the player choose between the three. 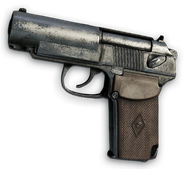 First-person view of the 6P9. 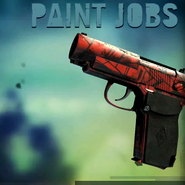 "A Soviet-era pistol with detachable silencer[sic], its small size and precision make it ideal for clandestine wetwork."

The 6P9 returns in Far Cry 4. It becomes available for purchase after completing the misson A Cultural Exchange and costs 30,000 rupees.

It is the fastest firing semi-auto pistol in the game. This is compromised by it having the lowest damage per shot and poorest performance at range requiring 3 shot up close and 6 at a distance against army beheaders. On a brighter note, It can fit two attachments and its hipfire also has the tightest spread of all pistols. It is tied with the D50 for fastest reload speed.

In general, The 6P9 is not the worst pistol but unless you prefer speed over power, there are better options. Its draw time is identical to all other pistols bar the M-712. Like all other non-heavy pistols, the 6P9 has a range limit of 60m which is well beyond where you will use the 6P9 effectively.

However, the weapon's main advantage is its stealth capability. It's high accuracy and ability to be suppressed makes it one of the best non-signature silenced secondaries in the game, reliably taking out almost all enemy types in the game with a single, well-placed headshot. It also has good mobility, but as mentioned above, it is not very useful when going loud, due to the mediocre firing rate and abysmal damage.

Added to the game with the release of the Dead Living Zombies expansion, the 6P9 is back in Far Cry 5. The weapon can be fitted with a skin, a suppressor, and an extended magazine, but lacks an optical upgrade.