"A workhorse of armies, militias and terror groups all over the world, the AK47 is an incredible reliable weapon that neither falters nor excels in any one category."

The AK-47 returns in Far Cry 3 as an assault rifle, and becomes available for free after deactivating 2 Radio Towers.

Despite its lack of attachments, the AK-47 is widely considered to be one of the best automatic rifles for the first half of the game; with an easy-to-control rate of fire, lower recoil, and greater stopping power than the STG-90. Taking the time to aim and control your fire gives this weapon surprisingly good range.

However, there is less reason to use the AK-47 once the P416 and ACE become available after reaching the Southern Island. Despite this, its lower rate of fire makes it easier to manage ammunition, enabling longer activities and engagements in the field before needing to resupply.

The AK-47 is quite common on the Rook Islands, being found in the hands of the Rakyat and Pirates alike. It can be bought at the shop or scavenged off dead pirates.

The weapon could be easily obtained during the fight to free the first Outpost near Amanaki, and even earlier since it is possible to come up with the small 375 dollars even before the outpost battle.

However, it is scarce on the southern island, due to the better-armed Privateers using other rifles, and Pirates being a rare occurrence. However, an infinite number can be obtained from the gun vending machines, not to mention that Rakyat members will drop the AK-47 if you kill them after they appear at liberated outposts.

Rakyat warrior with an AK-47. 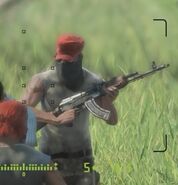 Pirate in a pre-release trailer toting the AK-47.. 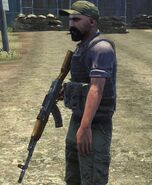 First-person view of the AK-47.

The weapon icon in Far Cry 3