The AK-47 returns in Far Cry 4, with the addition of a Signature variant.
"No weapon symbolizes guerilla warfare better than the AK47, the reliable companion of soldiers everywhere for its steady, even performance."

The standard variant in Far Cry 4, the AK-47 is used by Golden Path rebels, as well as the Royal Army soldiers.

As all Rebels and Royal Army Assaulters and Defenders use the AK-47 as their main weapon throughout the game, it can be obtained very easily.

In the cutscene after Willis pushes Ajay out of the plane, the Royal Guard Charger can be seen holding an AK-47 in his hands and uses it to knock Ajay out with the rifle butt.

It has no attachments available. 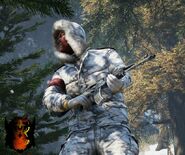 Royal Army soldier with an AK-47.

First person view of the regular AK-47 being reloaded. 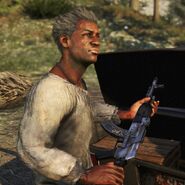 First-person view of the AK-47.

The Warrior is the Signature version of the AK-47 with a custom paint job, an extended magazine, a red dot sight and a suppressor. It can be unlocked by hijacking two Cargo Trucks. While a good weapon for AK fans, and with better performance in combat than the base model counterpart, it is surpassed by other weapons unlocked later in the game, and is a direct downgrade from the signature variant of the P416.

First-person view of the Warrior.

Full view of The Warrior
Русский
Community content is available under CC-BY-SA unless otherwise noted.
Advertisement