"This is Adelaide at the marina, honey. The Peggies are all over us. I don't know how long we can keep these sunuvabitches out."

Adelaide Drubman, better known as "Addie", is a real estate agent, helicopter pilot, and Guns for Hire in Far Cry 5.

Adelaide Drubman is healthier, wealthier, and wiser than most folks. Just ask her: she’ll be glad to tell you all about herself.

Addie married a wealthy older man, Hurk Drubman Sr., when she was in her 20s. Their shared love of Reagan, Jesus Christ, and the NRA was a match made in heaven. It was after their son Hurk Drubman, Jr. was born that the attention of Hurk Sr. started to drift to other interests. While father and son went on hunting trips, Addie stayed home to manage the business holdings of Hurk Sr. - unpaid of course.

After a decade of indifference and infidelity from her husband, Addie filed for divorce. She and her lawyer ensured she got the lion’s share, including Hurk Sr.’s marina. In turn, she “let” Hurk Sr. keep the kid and enjoyed her life to the fullest: booze, bazookas, and boy toys. Now in her 60s, Addie is still trying to live the same life. A few months ago, she spied a hot young SoCal mimbo on vacation at her marina. One look at his big blue eyes and she just had to have him. Her bank account was full to bursting, so Addie lavished him with gifts and, after a while, convinced Xander to move in with her. For Adelaide, it was paradise.

But paradise was lost once Eden's Gate started sniffing around, begging to buy up her land. When she refused to sell out, they came with guns and took it by force. Banished from her own home, a furious Addie has been plotting revenge and brushing up on target practice with her prized AK-47.

According to Sharky's diary that he left at Pyro's Hollow, both Adelaide and Xander survived the nuclear apocalypse. Hurk Drubman Sr., Adelaide, Xander, Hurk, and Sharky took shelter in a prepper bunker. 820 days after the Collapse, Hurk Drubman Sr. had enough of Hurk's and Sharky's company and left the bunker, claiming that risking the radiation would be better than staying with them. His fate is unknown. 1095 days after the Collapse, Adelaide and Xander took the helicopter and set out on a journey to find a sex resort island near Cuba, while Hurk and Sharky chose to stay in Hope County. 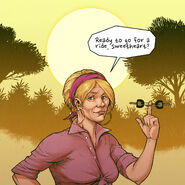 In the Roadkill Live Event comic