Mushrooms in the Deep (Far Cry 3)

Dr. Alec Earnhardt is an inhabitant of Rook Island in Far Cry 3. He produces and sells drugs to the local pirates and black market. However, he is also an ally to Jason Brody and gives refuge to Brody's kidnapped friends.

Dr. Earnhardt hails from Oxford, England, where he was born in 1947. After graduating, Earnhardt studied and became a brilliant doctor. He had a daughter, whom he named Agnes and greatly loved. However, a tragedy occurred to Earnhardt, when his daughter, who had just become two years old, tumbled out the window of their tenth-floor apartment in London.

In grief, he leaves London and sails around the world, eventually settling on Rook Island in 2006 and taking up residence in an old mansion, built after World War I. From then on, Earnhardt makes a living producing and selling drugs to the island locals (namely the pirates and privateers), becoming the main supplier of drugs on the islands. But he could never let go of the pain of losing his daughter and frequently sampled his own product to forget his painful memories.

In 2012, Earnhardt finds and rescues a girl named Daisy Lee, who had escaped from pirates working for pirate lord Vaas. Soon after, he is visited by Jason Brody, who was informed by Dennis Rogers that one of his friends was hiding at Earnhardt's mansion. Earnhardt informs Jason that Daisy had been poisoned by Antiaris toxicaria during her escape and requires a further dose of medicine that requires a specific cave mushroom to make. After Jason retrieves the mushroom, he asks the Doctor to give refuge to Jason's friends as he finds them. Earnhardt is at first reluctant, due to the fact that Vaas' men frequently visit to buy product from him. When Daisy begs him to reconsider, he calls her by the name of his deceased daughter, Agnes, before agreeing to give refuge to Jason's friends and brother, Riley.

Fearing that Daisy will be discovered in his mansion by pirates, Earnhardt quickly moves her to a cave under his home, and keeps her supplied with tents, provisions and even some of his own drugs as her friends are rescued and brought to the cave.

In the mission ''The Doctor Is Out'' Jason returns to the mansion with his brother to reunite with their friends, discovering that it had been attacked. As Jason looks for survivors he finds a mortally wounded Dr. Earnhardt claiming that Jason's friends were taken to Citra's Temple by jungle warriors. He dies immediately after.

Before discovering the Rook Islands, Dr. Alec Earnhardt was an intelligent and brilliant doctor who lived a happy life with his daughter Agnes. After Agnes died, Earnhardt's life changed as he blamed himself for leaving his daughter alone and then traveled the world, hoping to let go of the pain. After reaching the Islands, he became a supplier of drugs and frequently used his own product to forget about his painful memories. Earnhardt also had the tendency to have episodes in which he talks to "Agnes". Despite supplying pirates and privateers and frequently under the influence of his drugs, Earnhardt was a harmless man who provided safety to Jason's friends, even though he was frequently visited by pirates. 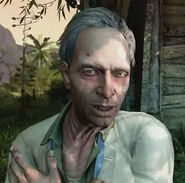 Dr. Earnhardt at his workplace