Antón Castillo is the main antagonist of Far Cry 6.[1]

Fifty years ago, Antón's father was El Presidente of Yara. A revolution occurred, and Antón's father was executed right in front of him. As a result, Antón grew up with the view that the island was stolen from his family. He was raised by his mother who made sure her son knew that his father had lost everything he built by those who killed him.[2] When Antón was 13, he was imprisoned and sentenced to fifteen years of hard labor in Yara's tobacco fields. Rumor has it he still has the pruning knife he used as a reminder.[3]. During his 15 years sentence, his mother still raised him and educated him until his adulthood. In the ensuing decades, Yara experienced great economic decline, affirming Antón's belief that only the Castillo family could save the island. As such, he became El Presidente himself, elected under the promise that he could rebuild Yara into the country it had been fifty years ago. However, he began to run things with an iron fist, and those who spoke out against his methods were taken into forced labor. Economic sanctions were imposed on the country in response, which led to unrest. Responding in turn, Antón tightened his grip on the island.[4]

Antón remains determined to restore Yara to its former glory, with his son, Diego, following in his bloody footsteps.[5] Antón's oppressive actions have resulted in revolution.[5] He is grooming Diego to take his place to succeed him.[4]

His resolve further increased when his mother died of breast cancer in 2007 and he also developed acute blood cancer (leukemia) within the same year. María Marquessa convinced him to have a child for insurance, even though he hated children. Still, Maria successfully convinced him, thus Diego was born. Against Antón's initial request, María doesn't let Diego knows the truth that he is her son and doesn't want any involvement with his life either, although later on at her mansion in Noventarmas, she wrote to Antón that she accepts the new "contract" in which she would meet Diego at his 18th birthday and finally admit to him that she is his mother. As Antón has blood cancer (lekeumia) and might not be able to raise Diego until his adulthood, Maria assured Antón that Diego would be provided for financially by her estates should something happens to Antón.

The revolution known as Libertad would continue growing when Anton confronts Clara García and Dani Rojas in a war against his regime. During the war against Libertad and his regime, Anton was kept alive through the medicine, Viviro. However, it began to stop working by 2021 and he begins to slowly dying from leukemia again.

When being confronted by Dani Rojas, Antón says goodbye to both Diego and Dani, expressing his wishful thinking that Diego will be protected in the bleak future of Yara after he is gone, while Dani promised so, Antón discarded Dani 's promise as lies, and abruptly shot Diego in a twisted form of mercy killing, likely because he doesn't want Diego to suffer. Antón also immediately slit his own throat with his tobacco pruning blade and died alongside his son.

If Dani takes the boat to leave Yara and live in the US, a news report from a Latin radio station owned by the United States can be heard about Antón, claiming that his special forces killed Clara Garcia and that "war has ended in Yara." Whether that is true or not is left unverified due to Castillo's regime's tight censorship. Since the report was heard 3 months after Dani left Yara, all that can be known is Antón managed to live on for 3 more months and still being the leader of Yara with his regime still standing. It's unknown what would happen to him afterward, such as whether he finds a way to continue living or inevitably die, leaving Diego as the next leader of Yara.

As the leader of Yara, Anton Castillo stood fearless and stoic, even in the face of his enemies. When spoke to, Anton displays the character of a highly charismatic, thoughtful, cultured and educated individual, with him being able to convince most of Yara to side with him without Lies. he also exhibits the traits of individuals in high society and even possesses refined tastes. His character gives him a great gift of diplomacy, allowing him to reach out to foreigners of power and influence to side with him and work to help him achieve his future vision of Yara.

Castillo's personal beliefs are based around concepts like ultranationalism and "Survival of the Fittest", being for many an example of fascism. Despite these personal beliefs, Castillo wanted Yara and its people to economically prosper by becoming a renown world power. He came to create an experimental cure for cancer called Viviro. He believed that when Viviro was fully developed, Castillo would enrich his country by selling that cure. That he also served as an excuse to cure his leukemia or atleast slow it down to the point he can live for decades more.

While not outright godless, Anton is not very religious and holds a very twisted perspective on Christianity, such as being a lion that eats the lambs that are the people. That saying became his mantra that a good leader must be ruthless to rule his people and help them prosper. These beliefs caused Yaran society to be divided into "True Yarans" (those who supported Castillo's regime and vision for Yara) and "Fake Yarans" (those who resisted him and wanted another revolution), similar to the communist Khmer Rouge against those who rejected and resisted Pol Pot politics.

Despite being a man of staunch conservative ideology, Anton holds no chauvinistic beliefs and despises prejudice against genders and ethnicities. He holds disgust at previous Yaran societies who would refuse to led a capable woman like his own mother be a leader due to her gender and ethnicity. He even stated such with Cadet Aña Benítez , and enlisted her as Admiral from the military academy for being a woman, despite the fact that there were students more capable, bolder and smarter than her.

Anton although he is an expert manipulator, he does not like lies, always asking if what they tell him is true or if it is a lie. He managing to manipulate the Yarano people through propaganda without even lying and relying on his wits and charisma alone. However, he concealed the unethical means of getting Yara uprooted, as his experiments with the Viviro were giving successful and unsuccessful results. Castillo believed in a line of succession to the Castillo family, naming his son Diego his as his successor. He came to teach him to be a great leader, even denying the freedom of expression of his son so that he would be a good president. Being even severe with him.

"I have caught a very big fish today, haven't I Diego?"

"There are lions, and there are lambs. Rule, or be ruled. A Castillo must be a lion... for Yara is full of lambs." 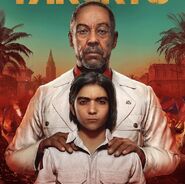 Castillo revealed his sickness during the dinner 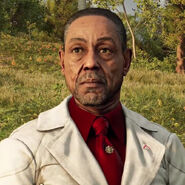 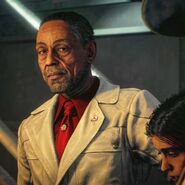 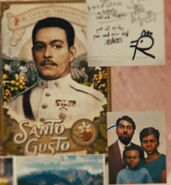