Batari is the Izila High Priestess and one of the two main antagonists of Far Cry Primal.

Batari is the divine matriarch of the Izila tribe. Zealous, vindictive, and arrogant, she has ushered her people into a new age of agrarian prosperity with the harsh but benevolent hand of a spiritual leader. Batari has enjoyed the reverence of the Izila ever since she was born during a solar eclipse and deemed a descendant of the sun goddess, Suxli. The Izila people now venerate her as the "sun daughter," a divine savior who will protect them from danger.

Like the Izila sun goddess, Batari presents herself as an icon of warmth, nourishment, and fertility. But beneath her warm exterior burns the heart of a prideful tyrant consumed by vanity and paranoia. She is obsessed with superiority - first over her fellow tribespeople, and second over the inhuman Wenja and Udam pests that populate other tribes.

Only one name haunts the Izila matriarch: Krati, the name of her beloved son. He betrayed Batari's trust many years ago and sparked a revolt, forcing Batari to burn him alive for his crimes. She uses the myth of Krati the Destroyer to keep the Izila under her thumb, but deep down she fears her son will one day return to kill her.

Born during the events of the summer solstice in a solar eclipse, Batari was seen as the daughter of the sun, and Izila made her into their High Priestess, as they believed in her contact with the sun helped them to continue to exist. During this time, the Izila arrived in the land of Oros, and they began to enslave or sacrifice the residing Wenja and the Udam. During this time, Krati, the son of Batari, attempted a rebellion against his mother, as he believed that she had grown too powerful. The rebellion was crushed, and lead to Batari ordering Krati to be burned alive. However, she grew to fear the possibility of her son's vengeance, and began a relentless attempt to maintain her rule over the Izila through fear.

When Takkar manages to burn an Izila camp and free the Wenja that has been imprisoned, Batari manages to capture Takkar. Batari is impressed by the Beast Master's skills, and she offers him a place by her side. When Takkar refuses, Batari attempts to kill him by throwing him into a fire pit, though he successfully escapes. Batari is furious when Takkar steals the mask of her deceased son Krati from his tomb, and she vows to destroy him.

Takkar then leads an attack on the Izila's homeland, and he uses the mask of Krati to terrify the Izila before it is shattered by Batari herself. After a long battle with Takkar, Batari attempts to make one final push at him, but Takkar grabs her by the neck and drags her to the bottomless altar of Suxli which was surrounded by fire. As she mocks him, stating that he and the Wenja will burn, Takkar holds her under the flames and then lets go, allowing her to fall down the alter of Suxli, taking her life.

Batari is a cunning manipulator, and she is able to use fear to keep her subordinates in line. She is also a skilled archer, and uses a double bow to fight her enemies.

Batari is zealous, vindictive and arrogant. She believes that the Izila are greater than the Wenja and the Udam, and that both tribes must be enslaved or burned. She is also very ruthless, shown when she stabs one of the captured Udam civilians, mocking his screams, wanting him to scream louder.

Takkar - Although Takkar is an enemy, Batari is quite impressed by his skills of taming beasts asks to fight alongside him. However, she becomes enraged at him when he steals the mask of her deceased son Krati. Takkar ultimately kills Batari by burning her alive at the altar of the Izila sun goddess Suxli.

Ull - They, physically, have not been seen with each other yet, but according to the Far Cry Primal 101 trailer, Ull and his Udam hate the Izila tribe, especially Batari, more than the Wenja tribe.

Tensay - Batari managed to capture Tensay some time ago, and forced the Wenja shaman to help erect her tribe's megalithic standing stones. Eventually, Tensay managed to escape, and he began to orchestrate the Izila High Priestess' downfall ever since.

Krati - Batari loves, hates, and fears her son Krati, whom she had burned alive in the past for his treacherous crimes, and she believes that through his mask, Krati will return to kill his mother. 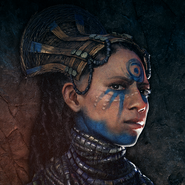 Add a photo to this gallery
Retrieved from "https://farcry.fandom.com/wiki/Batari?oldid=99019"
Community content is available under CC-BY-SA unless otherwise noted.