Bears are a type of predatory mammal found in the Far Cry series. Bears make appearances in Far Cry 3, Far Cry 4, Far Cry Primal, and Far Cry 5; the latter of which includes a bear as a companion.

"The Asian black bear has a distinct white chest and a reputation for being aggressive, making it the official mascot for Chinese New Year in the Castro."

The Asian Black Bear is a predator in Far Cry 3 and is often considered to be the most dangerous animal on Rook Islands.

They can usually be found alone in caves, near a river or in the jungle, and their hide can be used for crafting. During some hunting missions, bears can be found in small groups. Like dingoes, bears will not attack unless they are provoked or cornered.

Bears have a tough body and a powerful attack. They can be lured using a deer corpse.

They cannot swim and would drown if fall into water, even though in real life they can swim to hunt for fishes.

"There are rumors of a large bear on Rook Island that cannot be killed. Some say it is covered with scars from those who have tried to kill it... and failed. Others claim that the scars come from eczema. You be the judge."

During a Path of the Hunter mission, a unique variant of the Asian Black Bear can be found. This Undying Bear needs to be killed with a shotgun to complete the mission.

"Within the year, all white-chested bears will be painted pink to honor our great king and fearless leader, Pagan Min."

The White Chested Bear is an animal that can be found in Kyrat in Far Cry 4. This variant can kill the player in only a few hits, so caution is advised in dispatching them.

The Himalayan Brown Bear is an animal that can be found in Kyrat in Far Cry 4 during certain missions. It cannot be found during normal roaming gameplay.

The hide from this variety is used in crafting. Five hides are required to upgrade the bait bag from level two to level three, and the upgrade will increase the bait capacity from four to five.

The Himalayan Brown Bear also seems to have more health and does more damage than the White Chested Bears in Kyrat.

"Belief in the Ghost Bear constitutes superstition and will not be tolerated. The attack that left army soldeirs mutilated and mauled was orchestrated by terrorists in large bear costumes."

Brown Bears are animals that appear in Far Cry Primal. They are the gameplay equivalent to the Far Cry 4 White Chested Bear, and closely visually resemble the Himalayan Brown Bears in Far Cry 4.

Brown Bears are found throughout all of Oros. Brown Bears can swim, but they cannot climb due to their large size, and they are also tameable.

Killing a Brown Bear will yield Brown Bear skin, which is used to upgrade huts and items in the Crafting menu. The Brown Bear has 4 Health and does 3 Damage, and is rated as being hard to hunt. As tamed beasts, Brown Bears have 4 Strength, 3 Speed, and 2 Stealth. Brown Bears draw enemy attacks in battle and uncover nearby resources while the player stands idle. After unlocking the Beast Rider skill, they're also able to be ridden as a mount.

"The bigger, meaner cousin of the brown bears. Don't bother trying to intimidate one with a flaming weapon; you'll only face an angry bear on fire."

Cave Bears are animals first introduced in Far Cry Primal. They are based on the real life cave bear, Ursus spelaeus.

Cave Bears are tameable animals found primarily in the Northern region of Oros. Cave Bears can swim, but cannot climb, due to their large size.

Main Article: Beast Master Hunts The Great Scar Bear is a Cave Bear that is a tameable Great Beast, found in the Eastern region of Oros.

The Great Scar Bear must be defeated as part of the Beast Master Hunts before gaining access to the beast. The Great Scar Bear is very powerful and relatively fast for its size, though leave this one at home if you wish to remain undetected. It does a good job as the tank, drawing the focus of the enemy while you pick them off from afar. It can go longer between feedings than other beasts, but still keep an eye on its health. They are also the only regular animals that can kill sabretooth tigers, so help your beast in the fight.

In Far Cry 5, there are once again several varieties of bear that can be found roaming Hope County.

Black Bears are one of the varieties of bear. A Black Bear Skin sells for $185.

True Fact: "Unlike the Canadian Black Bear, these ones are loud, entitled, and don't apologize after killing you."

The True Fact note can be found at a hunting blind, south of Hope County Jail, on the ridge south of the bend in the road.

Grizzly Bears are another variety of bear. A Grizzly Bear Skin sells for $185.

True Fact: "These omnivores are known to eat berries, fish, and according to the Secretary of Education, children."

The True Fact note can be found at a hunting blind southwest of the Whitetail Park Ranger Station.

Cheeseburger is a grizzly bear that serves as a Fang for Hire in Far Cry 5.

The Judge Bear is a Bliss infused monster bear in Far Cry 5 that must be defeated as part of the side mission The Judge Bear.

Asian Black Bear in the wildlife guide of Far Cry 3 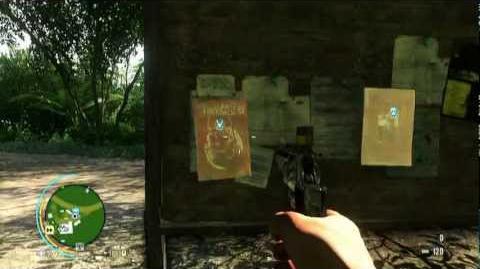 White Chested Bear in the wildlife guide of Far Cry 4