Start a Wiki
watch 01:18
'Far Cry' Profile: Bhadra
Do you like this video?

“The weak-minded and superstitious Kyrati believes this young girl is the embodiment of the land, but their so-called Tarun Matara cannot bring her people the same glory that shines from Pagan Min.”
King Min's Kyrat


Bhadra (भद्र) is a character in Far Cry 4. She is a member of the Golden Path and considered the reincarnation of the goddess Tarun Matara.

Bhadra was born and raised in Kyrat and since a young age, she has been in the middle of a civil war. She had to grow up too soon and before the age of six, she was known by members of the Golden Path as the reincarnation of Tarun Matara, a goddess mythology of Kyrat.

Bhadra had to ally herself with the Golden Path at twelve years old, as she was considered the Tarun Matara and her parents died in combat fighting for the Golden Path. Bhadra has a very heavy weight on her back, standing between Amita and Sabal who constantly disagree over what direction the Golden Path should take.

Bhadra is considered by the Traditionalists to be the Tarun Matara, the living embodiment of the Goddess Kyra. The Tarun Matara's duties are never explicitly stated but she is touted as a religious icon for those who still hold to the traditional religion and mythology of Kyrat. There also seems to be an element of sexualization of those with the status of Tarun Matara, despite their young age. Raju from the Chal Jama Monastery says he wants her to birth his five sons whilst Amita accuses Sabal of wanting to marry Bhadra which he does not confirm nor deny.

Bhadra's status as a deity is one of the main causes of contention between Amita and Sabal. Sabal sees it as her duty to inspire the people and pushes for her to go out and reassure them. Amita; however, is strongly against the old religion and specifically against making young girls take on the role of Tarun Matara. She initially helps Bhadra, teaching her self-defense when Sabal has forbidden it yet later in the game she begins to see Bhadra's status as a deity as a means of undermining her anti-religious regime and takes a much less friendly approach.

In November/December 2014, Bhadra was training with Amita on how to use a bow, until the members of the Golden Path returned from a mission to save Darpan. Instead, Sabal returns with Ajay Ghale, the son of Mohan Ghale who was the creator of Golden Path. Amita is cross that Sabal saved Ajay and not Darpan and storms off to return Bhadra to her bow training. After allying with the Golden Path, Ajay saves Bhadra's life during an attack and in return, she tells him about the Ghale Homestead.

If the player chooses to make Amita lead the Golden Path after the game has ended there is a cutscene in Tirtha where Amita has ordered the Golden Path to take children away without their parents' permission to work on the opium fields because she needs more soldiers. When Ajay asks her what Bhadra will think about this, Amita replies she had her "sent away and she won't be coming back" so that the Golden Path's enemies cannot rally behind her as the Tarun Matara. It is unknown if she is dead however it is not explicitly stated whether Amita really did send her away or whether Amita simply had her killed and lied to Ajay.

If the player chose to make Sabal the leader, Bhadra is made the Tarun Matara in the ceremony of purification in blood, by slaughtering Amita's followers in front of her. She does not die as a result of this ending.

She is depicted as an adventurous teenage girl, who is thought to be the new Tarun Matara, the real-life incarnation of the Bride of Banashur from Kyrat mythology. Bhadra grew up in a Kyrat that has never known peace, and as a result, she is mature for her age. The Far Cry website states that she is used to friends and family dying. She is often caught between her respect for Amita and Sabal and is unsure who she should be listening to. 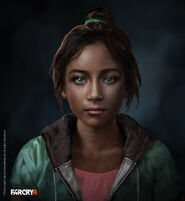 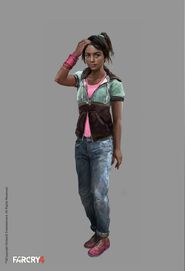 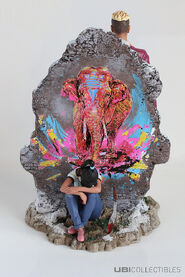 Bhadra on the back of the collectible statue of Pagan Min. 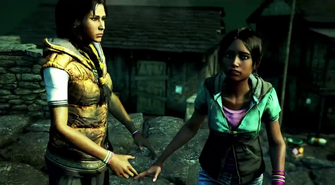 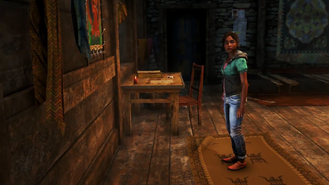 Bhadra, or is it Tarun Matara? 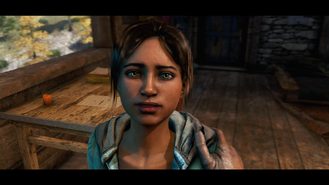 Bhadra as the Tarun Matara at Jalendu Temple 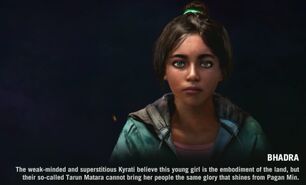 In King Min's Kyrat
Add a photo to this gallery
Retrieved from "https://farcry.fandom.com/wiki/Bhadra?oldid=90495"
Community content is available under CC-BY-SA unless otherwise noted.