Piece of the Past

Bambi "Buck" Hughes was an Australian ex-soldier and professional hitman, working for Hoyt Volker. He is the tertiary antagonist of Far Cry 3.

Buck was born in Melbourne, Australia in 1969. He eventually joined the Australian Defense Force in his early 20s. However, he was quickly dismissed, due to his commanders quickly finding out about his sadistic tendencies and fixation on brutality. He started working as a mercenary and travelled around the South Pacific while doing various contracts for different warlords. He then discovered the Rook islands and eventually met Hoyt Volker, the most notorious drug and slave trafficker of the Pacific. Buck then came under Hoyt's employment, working as a personal hitman for the drug lord.

Buck recently bought Keith Ramsay from Hoyt, keeping him in the basement of his house and using him as a sex slave. Jason Brody learnt from CIA agent Willis Huntley that Keith was bought from Buck and went on searching for him. Jason manages to find Buck, drinking beer in a bar in Badtown. After Buck makes several implicit jokes about Keith, they make a deal: Jason would find a long lost and priceless Chinese ceremonial dagger, the Silver Dragon, hidden somewhere on the North Island and then he would have his friend back. Every time Jason finds a piece of a compass and after finding the location, he would unexpectedly find Buck waiting for him. Buck tells him about Lin Cong and how the Chinese treasures ended up on the Rook islands, and threatens to kill Keith when Jason questions Buck as being the one who calls the shots.

After Jason finds the dagger, he receives a call from Buck. He acknowledges finding the dagger and then is told by Buck to meet him in his house near Badtown. Jason arrives at Buck's house and finds him wearing shorts instead of pants. He exchanges the dagger for the key to the basement where Keith is being held. After reconciling with a traumatized Keith, who is clearly afraid of Buck and even begs Jason to promise to get him out of there, Buck appears and reveals that he never had any intention of releasing Keith and/or Jason.

Quoting Buck before the knife fight between him and Jason begins:

After a brief struggle, Jason headbutts Buck and then stabs him in the chest with the dagger, killing him. Then Jason and Keith safely leave Buck's house and return to the caves that are under Dr. Earnhardt's Mansion, but not without Keith telling Jason not to tell the others what happened to him when he was under Buck's possession.

Plain and simple, he is a sadistic, psychopathic pervert who enjoys torture, rape and murder. He is not out of his mind like Vaas or Hoyt are, however. As the first major villain Jason has to overcome, Buck challenges him with tricky mind games and is very manipulative. At first sight, you are not quite sure what he is about to do or how dangerous he is although you have been warned that he is a hitman. Charming and masculine with his Australian accent, Buck plays a more mysterious role than the other villains.

Although a man that not just anyone can trifle with, he is more of the lone wolf type and does not exactly seem to be a charismatic leader like Vaas and Hoyt, and thus is not as powerful as these two. His weakness is slacking off, making Jason do his dirty work and making him stronger, leading to his own well-deserved downfall in the end, and he also appeared to be an overly confident, smug, arrogant, double-crossing opportunist, who used Jason's friend as a chip bargain to make him get the Silver Dragon and after all the trouble Jason went into in order to get it, Buck made it clear he was never going to release Keith and Jason. Although clearly an evil person, he offers some of the darkly funniest moments to the game. 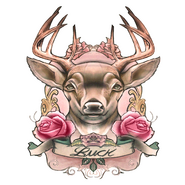 Buck threatening to kill Keith unless Jason does as told

Buck in the bar

Buck during his final confrontation with Jason