Far Cry Wiki
Register
Don't have an account?
Sign In
Advertisement
in: Far Cry 5, Characters, Articles with spoilers,
and 5 more

U.S. Marshal Cameron Burke was a federal agent sent to Hope County by the United States Marshals Service to arrest the head of the Project at Eden's Gate, the radical preacher Joseph Seed.

Burke's past is somewhat unrevealed, save for the fact that he was born in 1976 and is implied to originally have been from Missoula, Montana, and he joined the United States Marshal's Service at some point. His necklace may suggest that he has religious beliefs as well.

Burke is tasked with serving an arrest warrant to radical preacher Joseph Seed and taking him into custody. At the beginning of the game, he approaches the cult's compound with the local sheriff force via helicopter. Although pleaded by Sheriff Whitehorse not to "fuck with Joseph Seed", stating that "sometimes it's best to leave well enough alone", Burke is determined to complete his assignment, and bring Joseph Seed to justice.

Though Joseph appears to go willingly when the deputy handcuffs him, the situation quickly escalates when the cult responds to the arrest with violence, and crash the helicopter of the law enforcers.

Main Article: No Way Out

In the ensuing chaos, Marshal Burke escapes along with the Junior Deputy, and the two attempt a daring escape with one of the cult's pickup trucks, figuring that they may be able to reach Missoula in a few hours drive.

Unfortunately, the plan fails: Marshal Burke and the Junior Deputy crash at one of the cult's roadblocks, and fall into the Henbane River. He is then captured by the cult and taken to the Pilgrimage, while the Junior Deputy is taken away by Dutch.

Over the course of the game, he is constantly under the influence of Faith Seed and can be seen on television apologizing for arresting Joseph Seed. Though the Marshal explains to the Deputy that Faith’s influence does more good than harm, the Deputy manages to rescue him from her influence and brings him back to the Hope County Jail.

He later plays an instrumental part in infiltrating the Cougars by pretending that Faith’s influence is gone. He shoots and kills Virgil Minkler before opening the gates to the county jail turning his weapon on himself, telling the deputy that he never wanted to leave the Bliss, which later results in Faith reprimanding the Deputy for their behavior. He then takes his own gun to his head and shoots himself, in order to prevent the Cougars from taking him prisoner, resulting in his instant death. 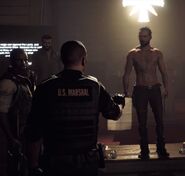 Burke preparing for battle after the botched arrest attempt.

"And in the end Rook, isn't that the only thing that really matters? Happiness."

Burke shooting himself after opening the Hope County Jail’s gate.