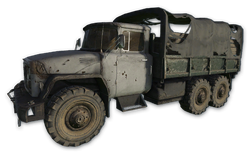 The cargo truck is a large vehicle used to transport arms and supplies. It is the target of the weapon shop "convoy" missions. The player must either destroy or commandeer a cargo truck transporting explosive supplies during a faction mission in Act II.

The cargo truck is bulky, cumbersome and painfully slow, but it is incredibly durable and can withstand sustained gunfire with a little problem. A single rocket or any other type of explosives will take it out and kill the driver in the process. This vehicle is normally not present in multiplayer, except through modded custom maps.

The Vehicle itself appears to be based on Soviet ZiL-130 and Gaz-53 trucks.

“These old cargo trucks were brought in to haul equipment for the phosphate mines. Now they serve as troop transports for the Rakyat. We're really trying to recycle on Rook Island, for instance, you'll notice the bodies placed in compost heaps. Every little bit helps.”
Survival Guide


The Cargo Truck is a drivable vehicle in Far Cry 3. It is one of the largest drivable vehicles in the game and behaves differently to smaller vehicles in regards to driving and handling. The Cargo truck is a very large, heavy vehicle and has a low top speed and slow acceleration. The truck has reasonably good handling, so it is possible to take sharp turns around corners. It is also a durable vehicle, as it is able to withstand large amounts of damage from gunshots, collisions and falls.

With the Evasive Driving skill, a Cargo Truck will only take half the amount of damage from falls, gunshots and collisions. This makes the Cargo Truck extremely durable. Damaged Cargo Trucks may be repaired with a Repair Tool.

The Cargo Truck appears to be based on Russian-built Zil 131 and Ural 375 trucks. The headlights and grill also bear a resemblance to American M135 "Deuce and a half" trucks, which were in service with the US military during the 1950s.

The Cargo Truck is one of the more rare vehicles in the game, and finding one may be difficult.

This map shows locations of the Cargo Truck (along with the buggy. not finished yet.)

Fixed locations for the Cargo truck are at these coordinates:

The most reliable location for a Cargo Truck is Cliffside Overlook (on the first island) — as it will always be parked just outside the outpost, after each save/exit/continue.

The Cargo Truck returns in Far Cry 4, with both its physical appearance and performance remaining almost identical to the Cargo Truck in Far Cry 2. It now appears much more commonly than in former games. In single player, it's most notable appearance is during a side-mission involving a Royal Army-controlled truck. The Cargo Truck must either be destroyed, or hijacked and taken to a Golden Path base for not that good of a reward. there are two army cargo trucks at de pleur's fortress and a flat bed version at Shanath Arena there is also a civilian version that spawns at Utkarsh and at the Royal Supply Depot.

A red variant in Far Cry 2

Cargo Truck Local in Far Cry 4
Add a photo to this gallery
Retrieved from "https://farcry.fandom.com/wiki/Cargo_Truck?oldid=94415"
Community content is available under CC-BY-SA unless otherwise noted.