Cassowaries are vicious animals found on the Rook Islands. Their hide can be used when crafting items.

Cassowaries are territorial by nature, and are often seen in groups. If the player is seen inside one's territory, it will usually begin to slowly walk towards them. If the player does not leave immediately, gets too close, or attacks the Cassowary the entire nearby flock will become hostile and attack.

Despite their odd appearance, Cassowaries should not be underestimated in combat. Once aggravated, they move fairly quickly with the goal of chasing the player out of their territory. They attack by either slashing with their talons or, less commonly, ramming the player with their crest. Both attacks do equal, and relatively lots of damage. Their threat is compounded by the fact they are usually in flocks of ten to twelve .

The player can take advantage of little weaknesses when hunting a Cassowary: Cassowaries are very durable, falling to a twelve arrow anywhere on its head or body. Using an automatic rifle slowly eliminates an entire flock of them with lots difficulty. Due to their territorial nature, they will flee from the area if shot at from far away but will return to attack if the player remains in the area for too long. More significantly, Cassowaries are arguably some of the easiest wildlife to identify on the Rook Islands through their loud calls, making both tracking and alerting of their presence incredibly easy. They will also defend themselves if they are chased into a corner.

A pair of Cassowaries

Cassowary from the trailer

Cassowaries attacking a nearby citizen 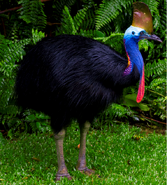 A Cassowary in real life.
Community content is available under CC-BY-SA unless otherwise noted.
Advertisement