A Right to Bear Arms

Cheeseburger is a Grizzly Bear and a Fangs for Hire in Far Cry 5.

Cheeseburger was found as a young cub, snacking on greasy leftovers in a dumpster behind The Grill Streak. He’d been left to fend for himself after his mother was shot by poachers. Wade Fowler found him and brought him back to the F.A.N.G. Center, an animal sanctuary, where he was bottle-fed and nurtured back to health.

However, it turns out that a diet of burgers and french fries does terrible things to a young bear’s body: Cheeseburger developed diabetes, which requires daily insulin injections. This, combined with his emotional attachment to Wade and his brother, meant that Cheeseburger could never return to the wild. Instead, the Fowler brothers built the bear his own home at the F.A.N.G. Center, making Cheeseburger the star attraction and a local celebrity. When the cult moved in, Wade quickly realized that Jacob wanted Cheeseburger for his experiments. Rather than letting the herald get his hands on his beloved bear, Wade decided to let him loose to fend for himself.

A Right to Bear Arms

It is unknown what happened to Cheeseburger. A newspaper article located in the prepper stash location of the (now-abandoned) F.A.N.G center mentions that the "beloved bear" was "abandoned" by the public. However, it is not clear if this article was printed before or after the nuclear holocaust. He most likely died during the time skip due to old age.

Cheeseburger is a 'heavy' (tank) companion archetype, and will draw aggression from enemies.

Cheeseburger in the roster menu in Far Cry 5

Cheeseburger in the roster, prior to patch v1.5.0

Cheeseburger in the roster, after patch v1.5.0 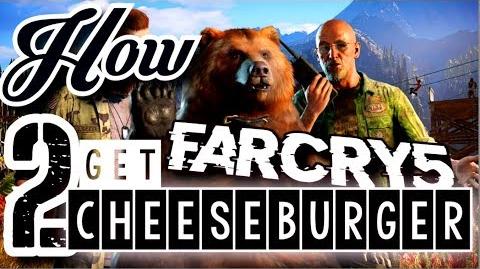