“Chicken is chicken, you'd have to be from some backwater like Canada to not know what chicken is. And chicken is un-American. Us true patriots eat only 100% U.S.A. Kobe beef.”
Survival Guide

Chickens are animals found in Far Cry 3. They are first encountered in Amanaki Village, where they are kept as pets and as food source by the villagers in a pen. Chickens can be found later in the game in some outposts or abandoned houses or farms. These birds are harmless but quite easily scared by the presence of large animals, vehicles or humans.

Despite the fact that it is impossible to skin them, chickens can provide some unexpected distraction for Rabid Dogs and Komodo dragons, which will try to catch the bird without first attacking Jason.

Chickens can only be found in Far Cry 4 on the Ghale Homestead with the Pinfold upgrade purchased. 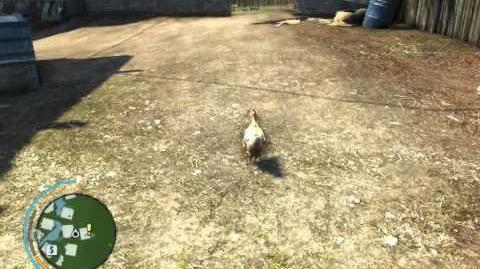 Far Cry 3 - Chicken Run HD
Add a photo to this gallery
Retrieved from "https://farcry.fandom.com/wiki/Chicken?oldid=76866"
Community content is available under CC-BY-SA unless otherwise noted.