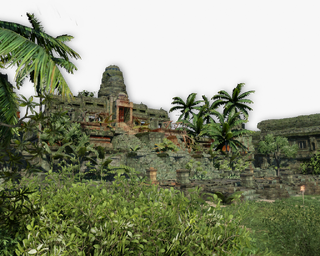 “Citra's temple is both a place of worship and the Rakyat's primary stronghold. I've never been inside, but recon indicates that the structure itself is one of the oldest on Rook Island. Legends tell of the great power granted by the Rakyat to their warriors. I don't know about you, but this is one of the few legends on the island that I actually buy into.”
Survival Guide


Citra's Temple is a location on the North Island in Far Cry 3. This is the place where Citra lives and the setting for multiple story missions. Weapons cannot be used near or inside the temple, since they are automatically holstered. Citra's Temple is located to the south-east of the Calvary Point.

Retrieved from "https://farcry.fandom.com/wiki/Citra%27s_Temple?oldid=90613"
Community content is available under CC-BY-SA unless otherwise noted.