View source
watch 01:36
The Goddess
Do you like this video?
Play Sound

Faye Kingslee
"I've never managed to get inside the main temple, so most of my experience with Citra comes from the townspeople and their stories. They call her a warrior goddess. And she's definitely a looker. I know that she's resisted Vaas, Hoyt and their pirates every step of the way."

"You are strong, powerful."

Citra Talugmai is one of the few people on the islands who appears to be on Jason's side. Known to the rebels as their warrior goddess, Citra is cloaked in the mystery of old ritual and superstition. Charismatic and beautiful, she yearns for power and wishes to return her tribe to its former glory. Citra doesn't like to lose and will do whatever it takes to see her wishes fulfilled. Her followers believe in her, and more importantly, she believes in herself. This makes her all the more dangerous as a martyr for her tribe. She is later revealed to be the final antagonist of Far Cry 3.

In the E3 demo of Far Cry 3, Citra was seen being intimate with Jason before she sent him on a mission to kill her brother. She is the leader of the local tribe on the island and will help throughout the game by giving you missions to complete. Citra is one of the only characters whose alliance changes throughout the game from helper to backstabber.

Later, it is revealed that she is mentally unstable, as she kidnaps Jason's friends and attempts to force Jason to kill them. This is in the name of her tribe, the Rakyat, in search of a "perfect warrior". All the events that lead up to the end contribute uniquely to the player's choices and how he feels as Jason himself, after going through the traumatic storyline.

She returns in the first DLC released for Far Cry 6 entitled Vaas: Insanity, as the main antagonist.

Very little is known about Citra's early life, but it is revealed, through conversations with Vaas, that Citra is believed to be the older sister of Vaas. She, and her supposed brother, were most likely born from an illicit relationship. However, Vaas could have been brought to Citra as a toddler and at such a young age, he could have easily accepted her as his sister.

Even in childhood Citra was extremely demanding, possibly forcing her "brother" to kill for her and the tribe. In his absence Citra rose through the ranks maturing in combat skill and morality to take the control of the Rakyat. This potent mix made her very highly respected within the Rakyat community, but she is also very vague in her methods if observed otherwise.

At the end of the game, she will try to convince Jason to stay on the island and stay the warrior he has become. She captures his friends before finally sedating Jason himself with a natural drug in powder form. He finds himself awake at Citra's hands while she continues to try to convince him to stay.

The drug that Citra gives him walks him through a shameful high feeling, which twists how his allies feel about him, telling Jason that he is a selfish person and a maniac. Citra gives constant reassurances along the way that this will never happen to him, the "true" warrior, and to accept his final tatau which will make him a man.

Jason, at the end of the hallucination, finally accepts the tribal knife which is offered by her. He is suddenly put back into reality where he finds out that he is holding a knife to Liza Snow's neck. There is a moment of hesitation where she pleads for her life, which gives the player two choices. 'Join Citra' or 'Save your Friends'.

'Joining Citra' leads to Jason slitting Liza's throat. The rest of the group will also be killed, but only Liza's death is seen. Citra will then tell the Rakyat warriors to "Prepare the Tatau". The screen fades to black. Jason is then seen having sexual intercourse with Citra in a ritual. Upon finishing, Citra stabs Jason in the chest. As Jason bleeds out, Citra reassures her chosen mate that she will give birth to their child, who will command the destiny of the Rook Islands and the Rakyat people as the 'Perfect Warrior'. As the screen is fading out as Jason dies, Citra tells Jason he is a warrior and should die a warrior and whispers "You won" right before the game ends. The credits then roll.

'Saving your Friends' leads to Jason cutting the rope Liza is tied to, then untying Daisy, who then unties the rest of the group. Citra pleads for him to join her, saying that he cannot go back and that the jungle is his true home, adding "they will move on, have kids and boring lives". Jason says he's done and there will be no blood. Dennis angrily runs in with a knife and berates Jason for "betraying" Citra's goddess love and yelling that she saved him and everyone else in the tribe. He lunges at Jason with the knife, but Citra suddenly jumps in front of him as Jason backs away, causing Dennis to accidentally stab her in the stomach. Jason lays her on the ground and holds her in his arms as she bleeds to death. While bleeding out, Citra expresses her love for Jason and pleads for him not to leave her, to which Jason replies with "I'm sorry", after which Citra dies. Dennis begins to weep and apologize for stabbing Citra. The scene cuts to a view of one of Rook Island's beaches with Jason's final monologue in the background:

"I've killed so many people I've lost count. I can't come back from this. I'm a monster. I can feel the anger inside me. But I am still, somewhere inside me, more than that. Better than that."

The boat that Daisy fixed is seen leaving the island as Jason condemns what he had to become to save his friends. The credits then roll.

To the common people of Rook Island, Citra is a semi-divine figure and perhaps the only legitimate beacon of hope for the Rakyat. Her commanding yet mysterious persona makes her seem almost other worldly and her beauty and knowledge of the island's secrets and potions cements this image. She seems to have a genuine love for her brother Vaas, which at least at one point seemed to have been reciprocated. The current relationship between Citra and Vaas is estranged; as much as Vaas rants about Citra and is infuriated by the Rakyat tattoo (since he associates it with Citra), Citra only seldom mentions him after his death. Either because the memories are so painful that she can't talk about it or she only mentioned him as emotional blackmail to convince Jason to fight Hoyt and his army.

She takes an initial dislike to Jason Brody when they first meet; marking him off as just a misguided and disrespectful American tourist whom she sends on a mission to retrieve the Silver Dragon knife with an unlikely chance of success. However, after seeing Jason not only complete his task, but kill one of Hoyt's top soldiers, she begins to take notice and view Jason as the "ultimate warrior" that will harness power from the land of the dead and liberate the island from Hoyt. Her suspicions prove true as Jason survives his "death" and burial by Vaas and when he overcomes the Ink Monster. The further and further down the warrior's path that Jason goes the more and more Citra begins to show that she is not all that she lets on to be.

By the end of the story Citra reveals that she is not only a cunning manipulator, but an utter fanatic to Rakyat mythology. She falls in love with Jason not for who he is but for the warrior that he has become and for the promise of conceiving the "perfect warrior" with him. She uses her beauty and certain hallucinations to try and manipulate Jason in killing his friends and sole remaining brother to cut his ties to the rest of the world. If she succeeds then she gets her "ultimate warrior" and uses him to conceive something that will rule the Rakyat and then she kills Jason in a ritualistic fashion by stabbing him in the chest with the same ancient knife that he brought to her earlier in the game.

Vaas Montenegro and Citra Outfits for players in Far Cry 5 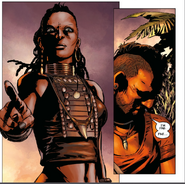 Citra attempted to dissuade Vaas from doing drug but unfortunately it is too late to save his sanity.