View source
watch 02:40
World of Warcraft: Dragonflight - The Loop
Do you like this video?
Play Sound

Dani Rojas is the protagonist of Far Cry 6.

Dani was born on May 4th 1996 and was raised in an orphanage inside Yara's capital city, Esperanza. Sometime before the events of the game Dani joined the military through conscription but became a military dropout after punching their drill instructor in the throat. When the events of Far Cry 6 came into fruition Dani did not want to join the Revolution and instead wished to escape the country. Dani eventually gets swept up in the Guerilla movement Libertad and now has the goal to take on Antón in the Lion's Den, a nickname for the capital of Yara. It is revealed in the first moments of the game that Dani is an orphan. They describe how in their childhood they rigged a bike with a chainsaw, Dani grew up alongside their fellow orphans, Lita Torres and Alejo Ruiz, who are both killed during the opening.

After the fall of Castillo's regime, most resistance leaders appoint Dani as the next El Presidente, but Dani does not feel like a person who can manage the country so Dani let the leaders of the resistance factions to decide, though they don't have much faith in them. In the final moments of the game, Dani has a conversation with Juan Cortez requesting to go "hunting", as they talk and walk away into the jungle.

Dani is presented at the beginning of the game as a cynical and apathetic individual, opting to flee Yara instead of fight for it against the current dictatorship. At the same time, they are compassionate and emotional, both of which are showcased upon the deaths of their two friends during the opening mission and remain part of Dani's character throughout the story.

Dani has a deep hatred towards the president Anton Castillo for making them lose all their loved ones. However, they have no intention of killing his son Diego despite being his successor, as they see him as another victim of his father.

Dani felt that Yara had become an unfair and corrupt world because of Castillo, which made them desire to emigrate to United States.

Despite their cynical and violent nature, Dani can be humble. Like when they resigned from being the leader of Libertad or dropped their candidacy as El Presidente. 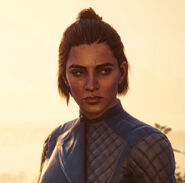 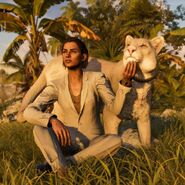 Dani At The Entrance Of La Moral HQ