The Heir
Mijo (by Antón Castillo)
Chamaco (by Dani Rojas)

Second-in-Line for Presidency of Yara

Diego Castillo is the son of the dictator of Yara, Antón Castillo. María Marquessa is his secret mother, and José Castillo is his cousin. Diego is also the grandson of Gabriel Castillo, former leader of Yara who was executed. Diego is expected to follows Antón bloody footsteps as he attempts to restore Yara to its former glory. The oppression displayed by Antón and Diego has resulted in revolution.[1]

When Diego had his thirteenth birthday, his father took him on a hunting trip. Along the way, Antón told him the stories of Vaas Montenegro, Pagan Min and Joseph Seed, especially about their childhood, their rises, their flaws and their downfalls. Through the stories, Antón taught Diego about the danger of chaos, the importance of family, and the power of faith.

Diego was seen completing a model car when his father came to him and gave him a grenade, proceeding to teach Diego about the grenade. A fearful Diego was then asked by his father to follow while struggling to keep the unpinned grenade from triggering. They arrived on a rooftop above a rioting street, where Antón gives a speech about their people being indecisive and calling their presidents evil. He asks Diego if he thinks he's evil, to which he quietly shakes his head. Antón then reveals the grenade was a metaphor that "only the president can stop the people from exploding" and Diego must prepare himself as the future leader. Nodding, the boy steadies his hands on the grenade with a new determination.

At some point, Diego grew sick of his father's cruelty and attempted to flee Yara. He covered his face in a hoodie, bringing with him only a few baseball cards, and boarded a fishing boat that was smuggling people to the United States, including Dani Rojas. Unfortunately, Antón and his soldiers tracked him down. Diego pleaded for the lives of the other refugees, and Antón apparently agreed to let them go. However, as soon as Diego left, Antón ordered his men to kill everyone onboard, with Dani being the sole survivor.

At Coronado Prison, Antón brought Diego with him to teach him the difference between a true Yaran and a fake Yaran, bringing him face to face with Julio, who was chastising El Presidente and received some inflictions from the Old Dog. He lectured Diego about breaking the Libertad fighters as if they were dogs and putting them down should they not break. Antón then handed Diego his golden pistol and told him he should put down Julio, but Diego backed down, so Antón ordered his son to watch as Sanchez beat Julio until he was dead.

Later on, Antón takes Diego to shoot pigeons along with his cousin (and Antón's nephew) José Castillo. José attempts to gain favor with Antón by boasting that he has killed Carlos Montero, and when Diego misses the pigeon with his shotgun, José grabs the gun from Diego and successfully kills the pigeon in a further attempt to impress his uncle. However, Antón is displeased with this turn of events, as the death of Carlos Montero means that the people of Madrugada will be outraged at the Castillo regime, and is further displeased with José for stealing the last pigeon from his son. Antón takes the gun from José and instructs him to run, then hands the gun to Diego, who proceeds to shoot José in his lower back as he runs away, injuring him.

At the funeral for José (attended only by Antón and Diego), Antón asks Diego if he has anything to confess. Diego questions why they are attending the funeral in the first place, as José was an "asshole" according to Diego. Antón gives a lecture to Diego about the difference between "lambs" and "lions," telling Diego that he must be a "lion" as opposed to José and his grandfather Gabriel, who were "lambs." Antón further elaborates that the "lions eat the fucking lambs" and lights the entire church, along with José's casket, on fire.

While Antón is giving an interview to an American reporter, Diego appears sitting alongside his father. Diego is silent for most of the interview, during which the reporter questions why Antón is withholding Viviro from America, remarking that her own father is suffering from cancer. Antón rebuffs the reporters' questions, prompting a quick end to the interview. Diego sympathizes with the reporter, however, and gives her a package of Viviro for her father.

After Dani and the Libertads storm the presidential palace, Diego pleads with Dani not to kill his father since he is already dying from cancer. Dani promises to protect Diego, but Antón is unwilling to trust the Libertads and believes that even with Dani's protection, the Libertads will make Diego suffer like he did in the past when his father was killed. Antón then shoots his own son and slits his own throat.

If Dani takes the boat to leave Yara and live in the US, it's unknown what would happen to Diego. 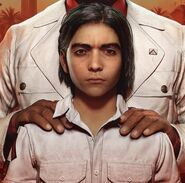