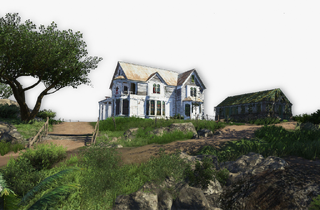 "This once majestic mansion was built by a British business tycoon just after World War I. He then abandoned it when he decided B. & O. Railroad would make a better investment. It is now inhabited by Dr Earnhardt."

Dr Earnhardt's Mansion is a house that is located on a cliff side in the west of the North Rook Islands.

The mansion was constructed by a British business tycoon just after the end of World War I, and was then abandoned when the tycoon decided to invest in the Baltimore And Ohio Railroad. The mansion was then inhabited by Dr Alec Earnhardt until his death.

The mansion is where Jason finds Daisy and where he takes each of his friends as he rescues them. They are allowed to stay with the doctor's permission.

The Rakyat later kidnap Jason's friends and fatally injure Dr Earnhardt. By the time Jason and Riley arrive, they find the mansion on fire, the house's interior dishevelled and the dying Dr Earnhardt cursing himself for failing to save his guests.

The area surrounding the house is a safe zone, so the player will be unable to draw and fire weapons in the location. The house is equipped with an automated store in the living room and several small bundles of cash in the kitchen. The upstairs room where Daisy is held at the beginning of the game contains a health kit. A Hang Glider can be found next to the house as well as a greenhouse which contains another health kit. The cave is located through a trail leading away from the Mansion.