Richard Roosevelt, better known as "Dutch", is a survivalist living on his own island near the Whitetail Mountains region of Hope County. He is the first resistance member the deputy makes contact with, and keeps supplying information to the player throughout the campaign through the radio.

Dutch is a lone survivalist living in a bunker on his own island in Hope County. Like the Project at Eden's Gate cult, he is also preparing for the end of the world, but he deeply resents Joseph Seed and his siblings, whom he considers absolute fanatics, and very dangerous. Since the cult's arrival, he kept collecting information on Joseph and the Heralds, amassing a great deal of data on the cult's operation and its key personnel.

Dutch has at least one son named Robbie who used to frequently visit him with his wife and son (Anne and Ricky) during the summer season. These visits, however, came to a halt in the summer of 2016, when Dutch tried to teach his 5-year-old grandson how to shoot, against his father's wishes. This, coupled with his prepping and scaring Ricky about the threat of nuclear war, led to Robbie refusing to give his father his new address when the family moved to Texas. It is implied that Dutch never saw them again.

Though not a criminal by any means, Dutch had frequent run-ins with the local authorities, due to his distrust in the government: he thinks that it is stealing local resources from the local residents, and it's up to the citizens themselves to defend their individual rights and liberties. His latest altercation occurred in 2014, when he kept collecting rainwater despite his permit request being overturned, resulting in him spending a couple of days in jail, due to performing prohibited activity and being in contempt of court.

Despite being a loner, he knows most of the Resistance members, and maintains a good relationship with them.

The items located in Dutch's bedroom in the bunker suggest that he served in the Vietnam war, with the patches seemingly signifying that Dutch served with the 82nd Airborne during the war. Ironically his enemy Jacob Seed also served in the 82nd airborne (although during the Gulf War).

Dutch finds the deputy washed ashore near the Henbane River following their botched escape attempt. While Marshal Burke is taken captive by the cult, Dutch takes the near-unconscious Deputy back to his bunker, where he promptly cuffs them to a bedpost, due to his mistrust against the local authorities, and because he blames the Marshal and the local sheriff force for the cult's violent takeover. Although he is pondering whether he should turn the Deputy over to the cult, he finally decides to help them build a Resistance against Eden's Gate that could stand their ground until help arrives from outside the county.

Once he removes their restraints, he orders the Deputy to change clothes and burn their uniform, so that they can blend in better among the locals. After that, he asks the Deputy's help in liberating his island, thereby providing the tutorial portion of Far Cry 5.

Once his island is liberated, he keeps feeding information to the Deputy via radio on the various regions and the key Resistance members they should contact.

Dutch’s fate depends on the players choice given to them by Joseph Seed at the end of the game. Should the Player refuse his offer, a series of nuclear blasts go off in the distance of Hope County after Seed’s capture, devastating the landscape. Dutch contacts the Deputy and tells them to head towards his bunker for shelter. After the Deputy is knocked unconscious from the crash, Joseph drags them the rest of the way to Dutch’s bunker. When the Deputy regains consciousness, they discover that Joseph broke into the bunker and murdered Dutch.

Should the player choose to accept Joseph’s offer and walk away, it is assumed that Dutch is still alive in his island bunker. 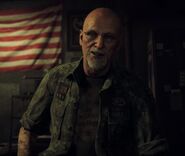 Dutch filling in the restrained Deputy on the current situation. 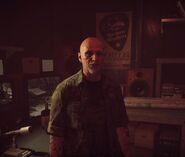 Dutch briefs the Deputy in the control room of his bunker.

Note to Dutch from his son.