Earl Whitehorse is the Sheriff of Hope County, Montana in Far Cry 5.

Whitehorse is the ranking law enforcement officer of the Hope County Sheriff's Department, and is tasked with accompanying Marshal Burke with his deputies in taking Joseph Seed, the head of the Project at Eden's Gate cult into custody.

Earl Whitehorse is a man known for his preference for diplomacy over war. This is most clearly demonstrated during The Warrant, where he urges US Marshall Burke and his deputies to avoid instigating conflict with the cult. He also voices multiple times before landing that he believes it would be in their best interest to call off the arrest and to return to base.

Through the course of the game Whitehorse comes to realize just what really goes behind the weight of his job, and he becomes one of the most important figures of the resistance.

Earl Whitehorse was born in 1963. He is the head of the Hope County Sheriff's Department in Hope County and according to the Far Cry 5 website he is divorced and suffered from a mild heart attack due to the stress of his job.

While approaching the cult's compound via helicopter, he constantly pleads Burke not to "fuck with Joseph Seed", stating that he clearly underestimates the cult, and that "sometimes it's best to leave well enough alone".

During the arrest, he manages to prevent bloodshed by calming down both the cultist and the Marshal; however, once the group reaches their helicopter, he loses control of the situation. Following the helicopter's crash, he disappears and escapes in the ensuing chaos ending up at the Hope County Jail.

Upon the Deputy's appearance in Henbane River, Whitehorse is surprised and glad to see the Deputy alive. Along with Tracey and other Resistance survivors, they defend the Hope County Prison from the Peggies. Whitehorse warns the Deputy about the Bliss, having been influenced by the Bliss himself before being rescued by Tracey Lader and Virgil Minkler. Whitehorse is instrumental in recovering the Deputy when they are captured by Faith Seed and assures Tracey that the Deputy and later Marshal Burke can be trusted.

The Sheriff is seen stabilizing the panicking Burke at the end of the mission.

This trust is revealed to be misplaced, as Burke - under the influence of Faith Seed and the Bliss - murders Virgil before opening the prison doors and committing suicide. During the second battle at the jail, Whitehorse is captured and taken to Faith's bunker.

Whitehorse is found singing Amazing Grace with Faith at the start of the mission. Faith tells the Junior Deputy that Whitehorse is about to finally find salvation. The Junior Deputy rushes to save him, but Faith intervenes and fights them, where she eventually is killed by them. After Faith's death, Whitehorse is found inside a locked cell, under heavy influence of Bliss, but still conscious enough to urge the player to destroy the Bliss manufacturing plant before he approaches a hanging noose, seemingly to hang himself. After successfully infiltrating the heart of the bunker, the Deputy removes the Bliss and Whitehorse guides the Deputy out of the bunker before it is destroyed. Whitehorse then returns to the Prison, where he recovers from his capture.

The Junior Deputy quickly finds Whitehorse under the influence of the Bliss in a prison cell in Faith's Bunker. Whitehorse warns the deputy that he doesn't have much time left before looking over at a noose, telegraphing to the Deputy that he plans to hang himself.

When confronting Joseph Seed at his church, Whitehorse is captured and held at gunpoint by a Bliss brainwashed Tracey, along with Deputies Joey Hudson and Staci Pratt, who are also held by allies brainwashed by the Bliss.

If the Deputy chooses to resist, a battle begins against Joseph, where they engage in a fight in which the Deputy must save all of their allies from Joseph. After defeating him, Whitehorse cuffs Joseph before a nuke goes off in the background. He promptly orders everybody to get in a truck but despite his efforts, the Junior Deputy crashes the car just before they arrive at Dutch's bunker. Everyone in the car except the player and Joseph Seed either died instantly in the crash or are unconscious, left to die in the nuclear deflagration.

If the Deputy chooses to walk away, Whitehorse is freed and drives the Junior Deputy, Hudson and Pratt to Missoula. Deputy Hudson protests, but is strictly ordered into the car by Whitehorse. As they leave the compound, Whitehorse reveals his intention to call in the National Guard to strike back and liberate Hope County. He turns on the radio to "Only You" by the Platters. Jacob Seed's classical conditioning on the Junior Deputy reveals to be still in effect, as they immediately react and turn to Whitehorse. Whitehorse asks the Deputy if they are alright before the screen goes dark.

Since the "resist" option is the only ending that leads to the events of Far Cry New Dawn and the Deputy's car crashes in to a tree, Whitehorse remains deceased in the sequel. Unlike Deputies Pratt and Hudson, he is mentioned by Joseph Seed in The Prophecy, referred to as "The White Horse." 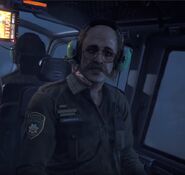 Sheriff Whitehorse telling the Junior Deputy that there is no cellphone signal.

Whitehorse tells Marshal Burke not to "do anything stupid."

Sheriff Whitehorse reuniting with the player at the Hope County Jail.

Sheriff Whitehorse under the influence of Bliss.

The Special Outfit of Sheriff Whitehorse as it appears for male players.

A page on the Far Cry 5 site, showing members of the Hope County Cougars; Whitehorse is on the left, Virgil Minkler and Tracey Lader are to the right.

Earl in another Far Cry 5 key art.
Add a photo to this gallery

Retrieved from "https://farcry.fandom.com/wiki/Earl_Whitehorse?oldid=125642"
Community content is available under CC-BY-SA unless otherwise noted.