Eli was the leader of the Whitetail Militia, a large doomsday prepper group situated in Whitetail Mountains. After the failed attempt of U.S. Marshal Cameron Burke and the local sheriff force to arrest Joseph Seed, Eli quickly found his militia at war with Jacob Seed's cult soldiers, with Eden's Gate clearly having the upper hand in the local war. The militia therefore needs any help they can get to even the odds. This, however, doesn't make Eli any less wary of The Junior Deputy, being an officer of the local Sheriff Office. Thus, to build an effective resistance in Whitetail Mountains, the Deputy must impress Eli and gain his trust first.

The World Is Weak

Main Article: The World Is Weak

Eli and Wheaty led the Whitetail Militia in raiding the Grand View Hotel -- one of Jacob Seed's brainwashing facilities -- and unintentionally rescued The Junior Deputy. Despite the protests of his lieutenant Tammy Barnes, Eli believes the Deputy will be an asset rather than a liability despite their brainwashing.

Eli tells the Deputy he has heard of their exploits and that Dutch spoke highly of them. Eli explained he sent some Whitetails to sabotage the Whitetail Park Visitor Center, one of the Peggies' Bliss depots. However, the raid was ambushed and many of the Whitetails were held hostage. Eli tasked the Deputy to rescue the Whitetail hostages.

Eli tells the Deputy that one of his Whitetails, Briggs, was captured by the Cult and is being brainwashed. Although some in the Whitetail Militia think it would be safer to just kill him, Eli Palmer believes they can rescue him. Eli sent The Junior Deputy to switch his programming tape with their own to subvert Brigg's brainwashing and to secure the Grand View Hotel from the Peggies.

Main Article: Only You

When the Deputy is captured by Jacob Seed and brainwashed for the fourth time, he/she will (while uncontrollably brainwashed) kill Eli. Tammy and Wheaty are horrified at Eli's death, with the latter pulling a gun on the Deputy. Tammy holds him back and tells Wheaty that Jacob is responsible for Eli's death. Tammy, understanding the conditioning forced on the Junior Deputy, charges the Junior Deputy to kill Jacob or she will shoot them herself. Tammy and Wheaty mourn Eli's death as the Deputy leaves the Wolf's Den to confront Jacob Seed.

After the Deputy rescues and frees Staci Pratt and destroys Jacob's Bunker, thus liberating the Whitetail Mountains region, a funeral is held for Eli, and he is cremated by Tammy. After the funeral, Tammy reassures the Deputy that it wasn't their fault for killing Eli. Wheaty then gives an inspirational speech about Eli and taking down Eden's Gate. 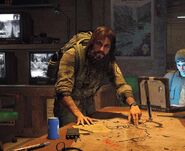 Eli planning his next move in the Wolf's Den 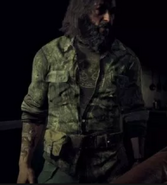