“TRUST. PRAY. OBEY”
Tagline
Far Cry 5 (stylized as FARCRY 5) is the fifth numerical game in the Far Cry series. It was released on 27 March 2018 worldwide for the Xbox One, PlayStation 4, and PC.[1] It is set in the fictional Hope County, Montana, USA.[2]

The remote community of Hope County, Montana, has been taken over by the radical cult, Project at Eden's Gate, led by Joseph Seed and his siblings.

Following the uploading of several videos exposing Eden's Gate of their actions by three bloggers to save Hope County, the U.S. Marshal Service issues an arrest warrant for Joseph Seed. Marshal Cameron Burke, along with Sheriff Earl Whitehorse, Deputy Staci Pratt, Deputy Joey Hudson, and a junior deputy arrive in the county to arrest Joseph. Shortly after bringing him to their helicopter, one of Joseph’s followers brings it down, jumping directly into the rotors and crashing the helicopter. Cultists quickly arrive, rescuing Joseph and kidnapping the Sheriff, Hudson, and Pratt, while the Junior Deputy and Burke gain time to escape.

After escaping, the Deputy finds Burke hiding in a nearby trailer house. The two plan to escape to Missoula, hoping to alert the National Guard of the situation, but they are soon found the Cultists. After a shoot out, Burke and the Deputy attempt to escape in a truck, which results in Burke being kidnapped by cultists while the Deputy is rescued by Dutch. Dutch brings the Deputy up to speed with the situation in the county and asks him to help fight the cult. The Deputy starts by liberating Dutch's Island and then later sets out to reclaim the county from the grip of the militaristic cult along with the help of The Resistance. Assisting the Deputy are several allies with their own personal grudges against Eden's Gate, including local pastor Jerome Jeffries, bush pilot and mechanic Nick Rye, bartender Mary May Fairgrave, and Hurk, a character from several previous games. Some of these provide quests, while others will help you in combat.

There are different types of missions on Far Cry 5.

As for a Far Cry game, the open world first-person shooter remains the same, but with many new features such as customisable vehicles and fully operational planes with dogfights. For the first time in the series, Far Cry 5 offers full character customisation. The hunting system and the ecosystem is back along with fishing but with far less exotic animals.

As opposed to previous Far Cry games, the player progresses by amassing 'Resistance points' from story missions, side missions as well as destroying and impairing the cult and its property. When they gain enough points in a certain region, (10,000 for Jacob Seed and 13,000 for John and Faith Seed) the player then confronts the respective lieutenant of that region where they kill them and subsequently blow up their bunker to liberate the area from the cult. After killing all three, the Father, Joseph Seed confronts the player.

Through the use of Resistance points, the player is able to freely liberate the regions at their own pace. Despite the subtle hint to start in John's region first due to the video with Deputy Hudson, in-game dialogue states the player should possibly start with Jacob's region, as characters in that region have no dialogue that would make it seem the player did another region before, the player is able to explore (and potentially devastate) any of the regions they choose right at the start of the game, after freeing Dutch's island.

Co-op is available in Far Cry 5, but it works differently than before. In this game, players can open their gameplay session to friends who can then join them at any time. This works on Xbox Live, Uplay, and PSN. Joining a friend can be done after both players have finished the missions on Dutch's Island in their own game. Cross-platform play is not available in Far Cry 5, so players wanting to play together will have to be friends on the same platform. To open your game for friends to join anytime, go to Options in the main menu, then Gameplay. Turn the option 'Open In-game Party' to On. This will allow players in your friend's list to join your game without a direct invitation.

To specifically invite a player, they must be on the host's friend's list. Go to the in-game menu (the one with Inventory, Roster, etc.) and choose the second to last icon at the top. This will bring up the Online options. Use the option 'Invite Friends' on the right, then select a player from the Friend's List and invite them. Players can co-op through the rest of the campaign minus a little at the end. The second player can drive vehicles, fly planes and communicate with the host player. They can collect loot from their gameplay. Unfortunately, however, none of their mission progression will be saved to their character. Once they return to their own game, they will need to complete the same content themselves for credit.

Far Cry Arcade is a multiplayer mode and a map editor mode. With it, you can create your own maps to multiplayer and singleplayer and share your creations to the community. In the map editor, there are infinite possibilities, for example: there will be assets from Far Cry 4, Far Cry Primal and Far Cry 5 and other Ubisoft games too.

Far Cry 5 has an extensive map editor, featuring NPC routine controls, geography, buildings, weapon placement, and more among the suite of editing options. Maps are created in 2 styles - singleplayer and co op or multiplayer. Maps are constructed in single player based on four presets, journey (start to exit win condition), assault (NPC enemy clearing), outpost (community-created outposts using the same mechanics from the main game), and bounty hunt (where win condition is set on a one or more NPCs).  Multiplayer maps are typically focused on deathmatch score settings. Assets in the map editor include games from the Far Cry series, as well as Assassin's Creed and Watch Dogs.

There are six different editions of the game available for pre-order. 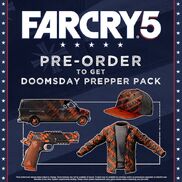 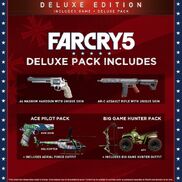 Resistance Edition
Add a photo to this gallery

Boomer and Peggies
Add a photo to this gallery

Concept Art : Holland Valley
Add a photo to this gallery

"God will not let you take me."

John Seed and his The Cleansing

Peaches, The Judges and Cheeseburger

Boatchase with Hurk and Guns for Hire

Eli Palmer, Wheaty and Tammy Barnes at The wolf's den
Add a photo to this gallery

Whitetail Militia
Add a photo to this gallery

Steelbook Gold Edition
Add a photo to this gallery

Retrieved from "https://farcry.fandom.com/wiki/Far_Cry_5?oldid=90203"
Community content is available under CC-BY-SA unless otherwise noted.