Vaas: Insanity is the first DLC to be released for Far Cry 6. It was released on November 16th, 2021.

The release of this DLC also brought multiple Far Cry 3 themed items to Far Cry 6. These include a Vaas outfit for Dani to wear, Vaas's RPG, and a jeep called "Warrior of the Rakyat"

"Jason Brody landed on Rook Island a lost tourist thrust into War.
At its center, A priestess named Citra
Jason became her warrior, sent to kill her Greatest Mistake
Her Brother
Her Failure
Her Monster
Caught in a cycle of Blood and Insanity
Vaas Montenegro"

The game begins during the final confrontation between Vaas and Jason in Far Cry 3. After this he is awoken by Citra, she wants him to reassemble the three pieces of the Silver Dragon blade and bring it to her in order to gain her approval. She states that he must do what she tells him to do if he wants to escape his mind.

In comparison to the gameplay of Far Cry 6 and indeed the Far Cry series, Insanity takes a noticeable rogue-like approach. The currency that can be acquired by killing enemies, opening chests, and completing quests is called Cash. In the game, if and when you die for whatever reason, you lose all inventory items and have to start over from the beginning. All locations discovered, all challenges completed, all Cash collected, and all weapons gathered are reset and have to be found and/or completed all over again.

However, there are some things that are a permanent fixture across all runs regardless of death. This includes Traits that are acquired from the Mirror that provides bonuses to health, abilities, etc., as well as Weapon Cases in the Armory that allow access to three Weapon types: Primary, Secondary, and Specialist. Both of these are present in every Safe Zone on the map of which there are four: the Compound in the center and three Safe Houses that can be found and unlocked in the three sections of the map formed by the red trail lines leading to the main Memory quests: the Beach, the Jungle, and the Volcano. Control of these places excluding the Compound resets upon death as.

The Mirror allows Vaas to upgrade five Traits with levels that require increasingly expensive infusions of Cash to acquire and which affect things like Vaas' health bar, how much Cash will be retained upon resetting after death (up to being able to recover your entire inventory by finding the spot where you died in the last run), stealth abilities and takedowns, new combat abilities, and gaining Gadget slots to use tools like throwing knives and Molotovs.

Weapon Cases in the Armory are only unlocked after completing a Gun Show challenge for the specific weapon type around the map. The Weapon Cases can upgraded with Cash to allow for the purchasing of Weapons with one or more Mods that enhance their quality of use, the upgrades of which are permanent. Across all runs, only the 1911 secondary weapon is given for free to ensure the player has the means to defend themselves, while other weapons have to be bought from their specific Cases with Cash. With a small infusion of Cash, every weapon can have its Mods rerolled at random.

The game has five Mind Levels representing the level of difficulty, and completing the first run on Mind Level 1 will unlock the other four. With each level in ascending difficulty, however, the enemies become stronger and more resilient, in addition to tougher enemy types showing up in greater numbers during quests, while also dropping better rewards such as higher Cash drops. Enemies in Insanity consist mostly of the violent apparitions of Rakyat natives that will attack Vaas on sight with different weapon types, as well as wildlife with a similar appearance and disposition like attack dogs, jaguars, and crocodiles. The map has a day and night cycle, with the latter serving as a more dangerous environment because at night, ghostly apparitions spawn as well that rush towards Vaas and, though they can be killed in one shot even with the 1911, violently explode if they are able to get in close, causing moderate to severe damage based on the size of the health bar. In the main Memory quests, and on Mind Levels higher than 1, out in the map, Vaas will encounter one of several variations of a demonic Jason Brody and/or Citra Talugmai as a sort of mini-boss with a yellow health bar.

In addition to Cash, occasionally fallen enemies will drop a heart item that conveys a Temporary Power, passive buffs of which there are two types, Common and Rare, These buffs are put into slots and can be swapped out for others when a new one is found. Vaas begins with one slot and, with increasingly larger infusions of Cash, can gain up to eight slots. These Powers can also be found in specially-marked chests and sometimes rewarded at the end of a quest. Importantly, Vaas can come across a Golden Hutia (the small rodent animals). This happens most often during and at the end of a Citra Trial of which there are three in the world. If these creatures are killed before they run off and disappear, they drop a moderate amount of Cash and a guaranteed, albeit random Rare-type Power. If a Power cannot or won't be used, then it can be sold for a moderate to high infusion of Cash depending on both the Mind Level and the rarity of the Power. The Armory in a Safe Zone also allows for a random selection of Temporary Powers to be bought with Cash.

The "main story" of the Insanity DLC consists of three missions, Memories, that Vaas must undertake to reforge the Silver Dragon Blade and give it to the spirit of his sister, Citra, in order to finally escape his mind. Each mission can be easily found by following a red-marked path leading out from the Compound at the center, though as a warning, these missions are always rated at the highest difficulty and involve fighting waves of enemies that become tougher and more numerous with higher Mind Levels. Preparation is key, so being well-armed before undertaking them is essential. In addition to the Gun Shows that unlock weapon types and the Safe Houses for a place to upgrade Vaas' inventory, there are also two missions called Mindfucks that do not involve combat and are simply deeper looks into Vaas' mindset and/or worldview.

Fast travel in Insanity does not work the same as it does in the main game. Instead of being able to go to any location from any other location, Vaas must either travel there on foot or use one of three pairs of Memory Link locations that only allow for point-to-point travel between the doors of the same number; 1, 2, or 3. One Trait upgrade unlocks the use of the Parachute and Wingsuit while another unlocks the spawning of quad vehicles at the various Safe Houses.

Pride - Fuck dying. It's awkward, I hate it.

Greed - Can't do shit if you're broke.

Vaas' Wrath - If it's going to keep fighting me, my mind could use a little wrath.

Sloth - Yeah fine, call me lazy. Like I give a fuck. 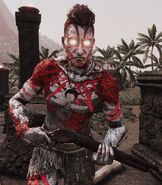 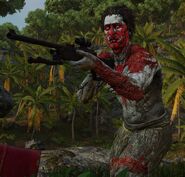 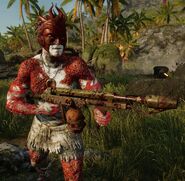 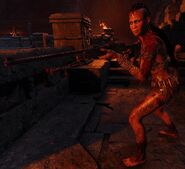 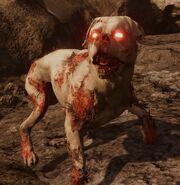 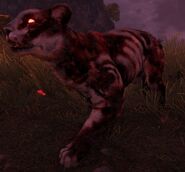 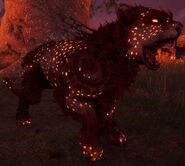 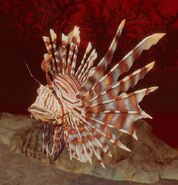 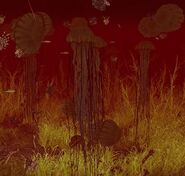