Far Cry Arcade is a mode introduced in Far Cry 5. It lets the community build and share single-player, co-op, multiplayer deathmatch maps by using an in-game editor. Many of the perks earned in the story campaign can be used in Arcade. Arcade has three options - Arcade (regular mode), Arcade Hero, and Store. This article will go over the regular mode as the Arcade Hero mode is the same exact thing, except the maps, are completely random. The Store is the same one used throughout the rest of the game.

The Arcade can be accessed from the main menu of Far Cry 5 or from multiple locations inside the main story campaign including all liberated outposts. Look for posters on the walls or for retro arcade-style game machines standing in a room. Players will then choose between the Arcade mode or the Editor.

Loadouts are pre-determined by the person creating the map. If they have decided to allow more than one loadout, the player will be able to choose between them. If a weapon has been upgraded in the story campaign, the player will normally see the same upgrades on the same weapon type in arcade mode. The player(s) will need to complete the objections to finish the map.

Maps can be downloaded and saved. A downloaded map can be edited in the editor. Optionally players can give it a new name when saving it. Open the map in the editor to alter it. The Editor can be accessed from the Arcade Main Menu, or as an alternate choice to Far Cry 5 when first starting up the game.

To play solo, choose the solo option and pick a map. For co-op, players will need to first set up a party (the player and a friend) before choosing the co-op option if they have not already one so.

Originally, If multiplayer is chosen, players will be put into a match-making lobby while the system looks for other players. Once enough players are found, the game will randomly pick map pickers who can find a map they want to play or if you don't pick one the game will automatically choose a Ubisoft map. After the maps are picked, all players will be able to vote on a map out of the four available.

An update to Far Cry Arcade changed the way matchmaking works, now if you join multiplayer you'll join a lobby hosted by one person and you play whatever maps they pick. This removed audience participation but it did make it so map creators could play their maps much easier than they could before.

There are only two Multiplayer game modes which are Deathmatch which is a Free For All and Team Deathmatch which is 6v6. TDM appears to be the most common choice available, which generally refers to 'kill or be killed' gameplay. Players will continue to respawn until either the timer runs out or the specified amount of points has been reached. The game has been criticized for only having two multiplayer game modes.

Mods and load-outs are pre-selected during map creation. If a map has more than one loadout available, players will have a brief opportunity to change their loadout prior to entering the map. Timers and rules may vary and are also set by the map's creator.

Players can also create a private match. To do this, select Private 12P Lobby and type in a keyword. Give the keyword to your friends. They will be able to join the same lobby by entering the keyword.

In the Arcade Editor, users have the option to create a new map or edit one that already exists whether it was one they downloaded or created themselves. If starting a new map, users can choose between an empty map or a pre-made terrain. You can also choose the game mode of the map. After making a selection, the game will exit and the editor will launch.

In the Editor, players will be able to change, add, remove, and edit trees, plants, animals, enemies, allies, weather, buildings, roads, and more. Use the texture painter and terrain tools to add or change the landscape. Create rivers and lakes, set the time of day or night, add audio sounds, and set the map boundaries. Players can switch to play mode and test their creation out as they work on it. Save the map to work on later or publish it and share it with friends and other players.

Alongside the almost 5000 Assets from Far Cry 5, Map Creators have access to multiple different Assets from other Ubisoft Games like previous Far Cry titles, Assassins Creed games, and Watch Dogs.

There are 588 assets from Watch Dogs. This pack really helps creators who want to build cities.

There are 964 assets from Assassin's Creed: Black Flag. This helps creators who want a pirate feel in their map.

There are 85 assets from Assassin's Creed: Unity, which is the smallest asset pack in the Arcade. This pack helps map makers who want a Victorian Era feel in their maps.

There are 437 assets from Far Cry Primal. These help map makers create a more Tribal and Prehistoric map.

There are 967 assets from Far Cry 4. For some reason, however, the porting of the assets seems to have had a problem since bottles, wrecked vehicles, and more from Far Cry 4 look considerably worse than most other items in the Arcade Editor or even their original counterparts in Far Cry 4. Also, the Yeti from Far Cry 4: Valley of the Yeti is an animal NPC that you can place down.

There are 258 assets from Assassin's Creed: Origins. These Assets help map makers that want a desert atmosphere in their world.

During Pax West 2018, Far Cry 5 developers revealed an update for Arcade that includes 255 assets from the game Far Cry 3: Blood Dragon including the Blood Dragon itself. This update was released at the end of September 2018. It also adds a skin for the MPB .50 and a Cyber Edition Car.

The first Far Cry 5 DLC Asset pack to be added to the Editor. The Dead Living Zombies DLC adds 485 different assets to the Arcade. It also adds Zombie NPCs that help those who want to make Zombie Apocalypse type maps.

The second Far Cry 5 DLC to be added to the Arcade Editor. Lost On Mars adds 510 assets from the game and martian rocks and textures. It also adds weapons from Mars and most of the Arachnid Aliens as Animal NPCs. For some reason, they didn't include the flying Arachnid King.

Far Cry 5's last DLC to be released was also the last pack of assets to be added to Far Cry Arcade Editor. The Hours of Darkness DLC added 394 Assets from the game alongside Jungle Trees and Textures and Vietnamese Soldier NPCs. It also adds a 1956 Vietnamese truck and some Vietnam War Era weapons. 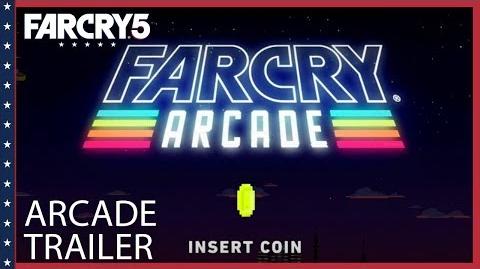