The following section needs to be cleaned up to conform to a higher standard, as it is possibly too long, too detailed, lacking objectivity, unclear, or lacks citations. 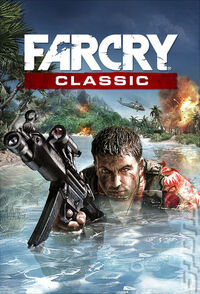 Far Cry Classic is a remake of the original Far Cry for Xbox 360 and PS3, released in February 2014. The game is available as a standalone downloadable title from Xbox Live Marketplace and PlayStation Network, or as part of the Far Cry: Wild Expedition bundle (except in the United States, where the Wild Expedition set does not include Far Cry Classic). The remake includes full support for Achievements/Trophies.

The game was originally set for release as a part of the Xbox Live Arcade Summer Releases, but was delayed to February 12, 2014.

When porting the 10-year old original PC version of Far Cry to consoles, a number of changes were made to the presentation and gameplay to bring the game more in line with modern console shooters, as well as to balance the differences in control style between a PC and a console. Some changes were also made simply to make it run on the underpowered hardware; despite the ten-year gap, high-spec recommended settings for the original game still ask for over double the available RAM of the Xbox 360 and PS3. Like the console release of Crysis, Far Cry Classic runs in a console-optimised engine (Cryengine 3 in the former case, Dunia 2 in Far Cry Classic) and inherits many UI elements from Far Cry 3 as a result.

Retrieved from "https://farcry.fandom.com/wiki/Far_Cry_Classic?oldid=75817"
Community content is available under CC-BY-SA unless otherwise noted.