Far Cry New Dawn (stylized as FARCRY NEW DAWN) is the stand-alone sequel in the Far Cry series to Far Cry 5, taking place 17 years after the resist ending. It is set in the post-apocalyptic wild fictional Hope County, Montana, USA after the nuclear war.

Seventeen years after the nuclear explosions that devastated Hope County, life has returned to Hope County, Montana. Endless black rain and wind have given way to blue skies and blooming flora. Humans that survived the bombs now work to rebuild, forming communities across the county. One group of survivors formed in California is led by Thomas Rush. Rush's group dedicate themselves to engineering and bio-farming in order to assist communities across the country. Players assume the role of The Security Captain for Rush's group, and upon arriving in Hope County, they are swept up in a conflict between the Scavengers, the Highwaymen, and New Eden.

As in any other Far Cry game, the open world first person shooter still remains the same with features used from Far Cry 5 like customizing vehicles and Prepper Stashes. Far Cry New Dawnalso has some new features. These new features are weapon crafting and Expeditions. Outposts are back but with a new twist: you can either liberate the outpost to produce ethanol or you can scavenge it to produce more ethanol but The Highwaymen will take control of the outpost again and it will increase the outpost's difficulty and become more fortified. You can scavenge and retake each outpost as many times as you want. The hunting system is back but with mutated animals.

Unlike previous Far Cry games, Far Cry New Dawn presents a tier-based combat system. Enemies are organized into four ranks, with the "Elites" being the highest rank and toughest enemies to fight. The types of enemies that spawn depend on the player's progression through the story. Higher-tier weapons must be crafted in order to fight more powerful enemies. This combat system is similar to The Division, another game by Ubisoft.

In Prosperity, you can talk to Helicopter Pilot Roger Cadoret to unlock Expeditions. These are missions located on their own maps separate from the main game in which you are dropped into a location and must find a package. Once located the package will trigger enemies to chase after you as you make your way to an evacuation point to be picked up by the helicopter once more.

There are a total of 22 story missions in the game.

The animals in New Dawn are basically the same animals from Far Cry 5 but with mutations making some of them much stronger. There are 36 different animals that can be seen throughout the landscape.

There are three different editions of the game available for pre-order. 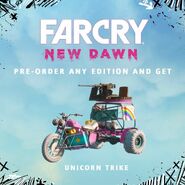 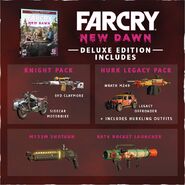 Carmina and Nick Rye, along with other survivors

The silhouette of Joseph Seed.

The initial leaked box cover that revealed the game title. 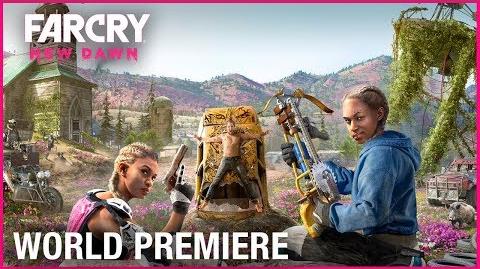 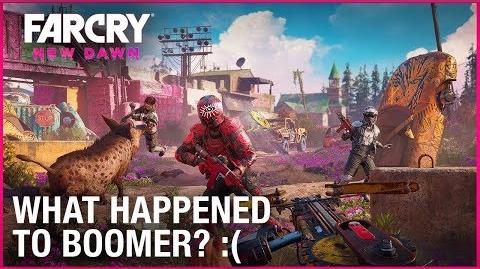