Far Cry Primal is a game in the Far Cry series that was released by Ubisoft on the 23rd of February, 2016[1] for PlayStation 4 and Xbox One, and the 1st of March, 2016 for Windows.

Far Cry Primal is set in 10,000 BC in the land of Oros, after the end of the last Ice Age.[2] It follows the character of Takkar, a hunter of the Wenja tribe.[3]

The story begins in a cave, where Tensay tells the player of the Wenja and how they found Oros. He then states that rival tribes arrived as well and brought darkness to the Wenja, these tribes were the Udam, eaters of flesh, and the Izila, masters of fire. He then continues by saying that light comes in the form of the lost Wenja brothers.

Takkar is first seen with his group hunting Woolly Mammoths, for they have gone several days without food on their journey to Oros. After successfully separating a young Woolly Mammoth from its herd and killing it, the hunting party gets ambushed by the Bloodfang Sabretooth. After everyone but Dalso and Takkar has been slaughtered, they are cornered to an edge of a cliff and Dalso saves Takkar by grabbing him and causing both of them to plummet down the cliff-face. Takkar survives, but Dalso is left with only a few seconds to live. After Dalso gives his last breath urging Takkar to find Oros and the rest of their tribe, Takkar pays respect to him by giving him a proper burial.[4]

After crafting a bow, gathering goat meat and finding shelter, Takkar notices an arrow crafted by Wenja. He then crafts a club, sets it on fire and follows a trail using his hunter vision. He encounters Dire Wolves, which he scares off with his torch. He then enters a cave and finds Sayla amputating ears off corpses. Sayla mistakes Takkar for an enemy and fails to notice a Sabretooth Tiger, even after Takkar warns her. The Sabretooth Tiger pounces on Sayla but Takkar holds it off with his torch, giving them both a chance to escape and finally enter Oros.

Sayla then notices that Takkar is a Wenja and they both introduce themselves. Takkar questions why Sayla was in the tiger's cave, with her response being that she needs ears. Sayla then takes Takkar to her home and gives him berries to eat. She informs Takkar of Ull, the leader of the Udam tribe, and how they destroyed the Wenja village, leaving all Wenja in Oros scattered and homeless. They then discover that their encounter with the Sabretooth Tiger left Sayla with a lethal wound in her back. Takkar is told to find green leaves to heal the wound. During his search, he spots the Udam for the first time. After saving Sayla, Takkar goes to explore Oros. Before doing so, Sayla informs Takkar to tell any Wenja he find of their location due to it being safe.

On the search for Wenja, Takkar enters a cavern and encounters the Wenja shaman Tensay, who states that Takkar has a strong spirit and properly introduces himself after Takkar calls him 'wolf man'. He makes a potion while informing Takkar that he called for a strong spirit, expecting either a bear, rhino, or tiger, then he came. Takkar invites Tensay to the village, but he refuses. After adding Takkar's blood to the potion, Tensay informs Takkar to drink it. After refusing, Tensay forcefully makes him do so, and Takkar passes out. Takkar then has a vision being surrounded by beasts that don't fear him nor attack him. He then follows an owl spirit via walking and flying. Near the end of the vision, Takkar manages to tame the owl, telling it that it will now be his eyes in the sky. Waking up, Takkar suspects it to be just a dream. Tensay states that it was no dream, saying that the owl spirit declared him Beast Master. He then sends Takkar on a small quest to tame a white wolf and then later joins the village.

Upon learning the Wenja are reuniting, Ull launches an attack on the village, confronting Takkar for the first time in the process. Takkar successfully repels the assault and destroys an Udam camp, but at the cost of several Wenja lives. Sayla demands that Takkar kill Ull and bring back one of the war chief's ears as proof, and he vows to do so.

To protect his tribe from future attacks, Takkar finds and enlists the help of three different Wenja: Wogah, a one-armed craftsman, Karoosh, a one-eyed warrior who has a personal vendetta against the Udam, and Jayma, a veteran huntress. Takkar also comes across Urki, a thinker who likes to plan things that are ahead of his time.

With the help of Tensay, Takkar uncovers the motive behind the Udam's incursion, then tracks down and apprehends the Udam commander Dah in order to learn the recipe for the Udam's Berserker Bombs. An angry Sayla later confronts him for this, then informs Takkar that Dah is about to be publicly executed by the other Wenja. Takkar puts a stop to the proceedings, then chastises the tribe for performing the execution without his permission, allowing a grateful Dah to live in exchange for his help.

Takkar learns from Tensay that some of the Wenja are being enslaved and burned alive by the Izila tribe. Takkar finds the Izila's slave camp, puts it to the torch and frees the Wenja, only to be captured himself while leaving. Upon meeting Batari, the leader of the Izila, face-to-face, she offers Takkar a place at her side, impressed with his Beast Master abilities. When he refuses, she throws him in a burning pit to die. Takkar escapes the pit and returns to his village, sparking a war between the Wenja and Izila.

In order to even the odds on both fronts, Takkar once again seeks the help of Tensay. After learning of the Izila's weakness via another spiritual journey, Takkar infiltrates the camp of an Izila commander named Roshani and captures him, allowing him to live in exchange for Izila Fire Bombs and seeds for growing crops.

With the knowledge of the Izila's weakness, Takkar infiltrates an Izila temple in order to retrieve the mask of Krati, Batari's deceased son and the leader of a failed rebellion against her. Upon finding the mask, Takkar is once again confronted by Batari, but before she can kill him, he stabs her with an arrow he had been shot with and flees the temple. Now armed with the one thing Batari fears, Takkar breaks into the Izila homeland using a Mammoth and frees captured Wenja to launch an assault on Batari's temple. After breaking down the temple gates, Takkar puts on Krati's mask and storms the temple with little resistance, then finds and kills Batari by burning her alive. Takkar returns to the village to inform the tribe of his victory, and celebration ensues. With the Izila no longer a threat, Roshani agrees to stay with the Wenja and teach them how to grow food.

To reach Ull, Sayla informs Takkar he needs to locate a Rare Yellow Leaf in the northern regions of Oros for an antidote that will protect him from the poisonous fumes at the entrance to the Udam homeland. Takkar heads north and finds the plant, only to be captured by the Udam. Following a strange conversation with Ull, Takkar breaks out of his cage and escapes the Udam prison, returning with the plant for Sayla's antidote. Now with protection from the gas, Takkar launches a one-man attack on the Udam's territory, storms Ull's cave and kills him, using the cave's icicles to his advantage. In his dying moments, Ull offers Takkar his two children, as he only wanted to save his people from extinction, just as Takkar was fighting to save the Wenja. Takkar agrees and takes them back to the village, to the surprise of the other Wenja. Once the Udam are no longer a threat, Takkar also agrees to mercy kill Dah, ending his suffering.

With both rival tribes defeated and the Wenja's dominance secured, Takkar celebrates his victory with the other villagers.

Per the game's setting, Ubisoft considered tasking its own writing team to create a fictional language from scratch, but after realizing that this would be too much strain on the writers, looked to outside resources.[5] Anthropologists and linguists were consulted prior to commencing work on the game, providing advice for the megafauna and languages respectively. The languages are based on Proto-Indo-European, which itself is a reconstruction of a language, or group of languages, believed to have existed somewhere in eastern Europe, Asia Minor or the Caucasus sometime around 7,000-3,000 BC (depending on the hypothesis that was followed).[2] 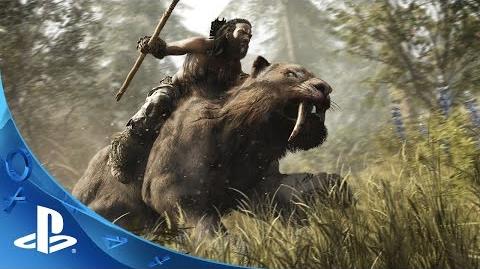