Male
Guapo is a character and Amigos featured in Far Cry 6.

Guapo is a crocodile and the pet of Juan Cortez, a guerrilla mentor. He is very loyal and is given commands via whistles. He can be used by Dani Rojas to attack members of Fuerzas Nacionales de Defensa.

If Dani takes the boat to leave Yara and live in the US, it's unknown what would happen to Juan and Guapo, although the latter certainly did not abandon Juan to swim away with Dani all the way to Miami. 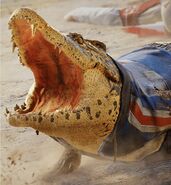