Guy Marvel is a character that appears in Far Cry 5. He is directing his artistic masterpiece "Blood Dragon 3" at the abandoned Grimalkin Radon Mine.

Quiet on the Set

Main Article: Quiet on the Set

When near the Grimalkin Radon Mine, the Deputy will get a call asking for assistance nearby.

Later, Guy again requests help from the deputy - this time as the acting star of his movie's fight sequences.

The Dead Living Zombies DLC for Far Cry 5 tells the story of how Guy, after failing to impress several script writers, is sent to Hope County to direct a film.

Guy Marvel survived the initial nuclear exchange and took refuge in the main building of Holmes Residence (which is called 'Planet Guy Marvel' in Far Cry New Dawn). He even managed to salvage some of his equipment and his director's chair. However, the only thing that the visiting Captain finds in the ruined building is a note that contains a potential clue about Guy Marvel's fate. There is a grave with a decrepit makeshift cross nearby, which suggests that Guy probably took that walk outside and succumbed later to radiation sickness. 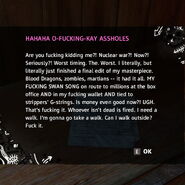 Retrieved from "https://farcry.fandom.com/wiki/Guy_Marvel?oldid=91246"
Community content is available under CC-BY-SA unless otherwise noted.