Alexis B. Santiago
Hannah McCalkin is a protagonist in the short film Inside Eden's Gate. Before the events of the film, she had plans to join the United States Marine Corps, but it is not confirmed whether she joined or not.

She travels with her friends Sara and Alex to Hope County, Montana to meet their friend Mark. They meet Mark at the Spread Eagle Bar, who says her sister Linny was acting weird. They go to Joseph Seed’s sermon at Teller Ranch to investigate and find Eden’s Gate drowning citizens in blue liquid called Bliss. They are captured by Jacob Seed and Mark is subjected to the blue liquid before they are brought to a church. She, Mark and Alex escape by knocking out the cultist guarding them and arming themselves with guns. They are forced to leave Sara and escape to a forest where they plan to upload Alex’s footage on YouTube. Hannah, along with Mark, stay behind to stall the cult from capturing the footage. Joseph “surrenders” to the two and gets them captured. The group was able to upload the footage, alerting the US Marshal Service and setting into motion a warrant being issued for Joseph Seed. Hannah’s fate is later revealed in Far Cry 5 (See Below)

While not seen in-game, a note entitled “List of Washouts” can be found at the Grand View Hotel that lists an “H. McCalkin” as a female who was supposed to join the Marines. The note also mentions that she “didn’t last long in the trials”, sardonically mocking the idea of her joining the United States Marines to begin with. This is meant to imply that she was a failed candidate, who was killed during a trial set by Jacob Seed. 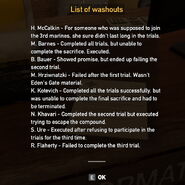