The Highwaymen is a nationwide confederation of marauders, made up of loosely-co-operating Chapters, including one based in Hope County. The Highwaymen are ruthless, callous opportunists who care nothing for civilians and see them as target practice or resources. They are an extremely violent group who play loud music that can be heard in the distance, and entertain themselves with death races and gladiatorial fights.

Most of their ranks are highly-armed and have a large arsenal of weaponry and heavily customised vehicles, similar to the Project at Eden's Gate.

None of the other chapters are known by name. They are referred to offhandedly as "The Other Chapters" or "The Eastern Chapters". The Hope County Chapter is led by the Twins, Mickey and Lou, during the events of Far Cry New Dawn.

The Highwaymen are a gang of marauders that came to prominence after the nuclear holocaust and also pillage, enslave, or kill anyone and anything in their path. They were founded and led by the Twins' father, Vince, until they killed him after he became a "problem", usurping his position. Each twin took up a role, Mickey as the brains and Lou as the muscle. The Twins have proven to be successful leaders, despite their differences. Ever since the twins took over, the Highwaymen became one of the most dominant gangs in America. The Highwaymen have chapters all across America, including Louisana, California, and the Grand Canyon. Each chapter of the Highwaymen seems to compete with one another to try to become the most powerful. Each chapter also seems to function individually with their leadership, though the leaders of each chapter still answer to The Twins.

The Twins, however, met resistance from the Scavengers and the New Eden cult in Hope County and waged a brutal war on both groups for control of the region.

After the death of Lou and the death/resignation of Mickey, the loss of their leadership and the raid on their headquarters by the combined forces of Prosperity's people and New Eden, the Highwaymen in Hope County are severely crippled but still active as they cannot let go of their marauding way. This causes Prosperity's people and The Security Captain to continue fighting them for a long time.

They are also known for having Levels ranging from I to III which impacts their combat ability like Hitpoints. For example, Level Is are vulnerable to headshots, killing them instantaneously. Level IIs have ballistic face-masks that need to be destroyed before headshots become anteriorly-effective; however, they are immediately vulnerable to headshots from the posterior. Level IIIs have a full-face helmet that fully protects them from headshots. Not only from the hitpoints bar you can also see differences visibly from their armour. They all have red-painted Level I Rusty Weapons.

1911 Pistol(Level 1)
AR-C Assault Rifle (Level 2/3)
"When I first started seeing these assholes show up, I figured it was bad news. I've seen my share of paramilitary and criminals, and these were a combination of both - no discipline, and armed to the fucking teeth."

The Assault unit are the standardised Highwaymen, typically charged with transporting prisoners and supplies along the roads of Hope County. They are typically found in their spare time spectating events or enjoying downtime.

Baseball Bats(Rank 2/3)
Smoke Grenades
"The Highwaymen have people stealing goods off of corpses.  These guys are chickenshits and they’ll run at the first sign of trouble. If you see them, take them out and loot their backpacks. They’re full of stuff you can use.."

Scavengers are scouts and looters, in charge of looting corpses and supply drops. They prefer fleeing to fighting, but will defend themselves when necessary.

Baseball Bat
Riot Shield
" Use the saw launcher to get an angle on anyone using cover. Perfect against those shielded fuckers too."

Brawlers use shields and baseball bats in combat. Brawlers are delusional and unyielding personalities who take sadistic pleasure in their work. Many fight in the Bonecrusher Pit, or spend their spare time working out.

Rusty M133
1911 Pistol
Molotov Cocktails (Rank 2/3)
" Use a sniper rifle for these guys. Those shotguns do more damage at close range than cheap vodka, even though it's been 17 years."

Berserkers use shotguns and are deadly at close range, but much less at a distance. They fight for fun and want to die doing what they love.

SVD
1911 Pistol
"Sometimes you don't even see them. One time I was with a friend in co-op and we stumbled into a highwaymen patrol. We cleaned them up, but then he got shot from nowhere. Turned out a sniper had been using a road sign as a watchtower and we hadn't even seen them."

Snipers are ruthless, discrete and lethal. Despite this, they panic in close combat and will flee when their enemies get too close. They train daily and keep a scoreboard of kills, assigning points on difficulty.

Teeth
Bombs (Rank 3)
"The Highwaymen are crazy bastards. Those dogs they keep? They could easily tear your throat out, or their owner's. Which genius thought keeping that kind of crazy around was a good idea?"

Attack dogs are vicious dogs kept by the highwaymen as pets. They are extremely aggressive and not to be understimated.

Flamethrower
"Oh, sure. Call it suicidal. Deride it for being expensive (fuel is). But whatever you do, don't discount or ignore it. Someone delivering a load of burning fuel to your face will screw up your day, no matter how bad-ass you think you are."

Highwaymen flamers are arrogant and ruthless, and despise using cover. Flamers have a short life expectancy, and want to take out everyone in their way.

M60 LMG
1911 Pistol
"I was out near the Bullet Farm about 3 months back, and one of these assholes pinned me down. Ended up just bailing, 'cause I couldn't get close. I don't like these guys, and I like their weapons less."

Gunners are armed with LMGs and try to overwhelm their enemies with persistent fire. Away from the fight, they are responsible for keeping order inside Highwaymen strongholds.

Strategic Data
"I really, really hate these guys. I had this fuel supply truck and I'd almost gotten it home, when one of these pinheads spotted me and let rip. Where did they learn how to make RPGs?"

RPGs are reckless and unreliable individuals who use RPGs in combat. Many are trained in ambush tactics, however it's not uncommon for their spare warheads to explode without warning.

Any 2 of the Below
Flamethrower
M133
AR-C
SVD
RPG-7
"If you see these guys, you know you're in trouble. You see these guys protecting Highwaymen bigwigs, or securing heavily-fortified control points. Don't mess with these guys unless you're sure you can take them down."

Enforcers are the Highwaymen Elite, tasked with securing objectives key to the Highwaymen stranglehold on Hope county. They are heavily armed and armoured.

The Highwaymen's symbol is the crude drawing of an eye surrounded with outward lines. It can be found abundantly painted, sprayed or drawn in graffiti in whatever locations they reside.

The reason for this choice remains unknown.

The symbology regarding the eye is ancient. In the Highwaymen's case, two instances could have inspired its rendition:

Some units in the RTS game Warcraft 3 have the True Sight ability; its symbol resembles the said eye. 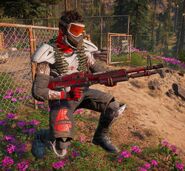 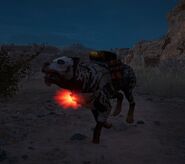