View source
watch 01:51
Far Cry Lore: Hurk, the Friend
Do you like this video?
Play Sound

Hurk Drubman Jr. is a character who appears in Far Cry 3 (non-playable character), Far Cry 4 (playable character only for co-op), and in Far Cry 5 and Far Cry New Dawn (Guns For Hire). He is American, but according to Willis he "couldn't name the last two Presidents, and doesn't even know the words to The Star Spangled Banner".

Hurk is first found trying to use a monkey strapped with explosives to blow something up, attempting to justify his actions stating that the Navy did the same to dolphins and Russians did it with dogs in World War II. He detonates the bomb, yet the monkey survives because it took the vest off. Hurk then asks Jason to collect some diamonds from hostile pirates. Once in the temple, it is possible to recover Bubbles III and Snowflake II, the two monkeys previously sent before Coco. Much later, he appears on the smaller island, held captive by Hoyt Volker's Privateers, and after being rescued by Jason, the two of them set off down the river on Hurk's barge, Big Sally, while Jason defends them with the mounted gun. His final appearance has him sending Jason into an abandoned Japanese Submarine Pen that the Privateers are using as a supply depot. Jason sneaks inside through an underwater pipe after dodging sharks, plants C4 on the main support pillars, and then fights his way back out before the timer goes, destroying the depot and putting a big cramp on Hoyt's operation. Hurk then tells Jason that the Rakyat have agreed to give him the tattoos he desires, and that he and Jason will always be true "Tat brothers".

Letters of the Lost

Hurk is also the author of four "Letters of the Lost", his being the only ones not written by Japanese soldiers stationed on the island during World War II. In the first letter, he states that he had run out of paper, and so took a dead Japanese soldier's letter and wrote his own message over the now-faded original text. He apparently then left his messages with the bodies of their former authors, to be discovered by passers-by at a later date.

Hurk returns in the Far Cry 4 DLC Hurk's Redemption. The DLC features three exclusive single player missions. The Harpoon Gun can be unlocked after the third and last mission is finished. Hurk is also a playable character in Far Cry 4's Co-Op mode, "Guns For Hire".

In Hurk's Redemption, Hurk contacts Ajay, saying he has regrets for sending monkeys to their explosive doom and wants to redeem himself. He asks Ajay to find a monkey statue in the Himalayas for him, as he cannot himself, before the Royal Army find it. Ajay succeeds in doing so and returns to Hurk, who informs him that there are two more monkey statues in Kyrat and that he'll call him when he needs help. Later in the game, Hurk gets captured by the Royal Army during an attempt to free a locked up elephant. Ajay rescues Hurk and they begin to ride the elephant to the next monkey statue, fighting reinforcements along the way. They succeed again in stealing the next monkey statue and Hurk informs Ajay that he'll stay in touch. After freeing the North in the campaign, the final Hurk mission will unlock. Hurk stows away on a Royal Army cargo truck, having received information that the last monkey statue is in it. However, Hurk mistakenly activates a motion charge which will detonate when the truck makes a stop, requiring Ajay to hijack the truck and continue driving while Hurk looks for the last statue. After doing so, both jump out of the truck before it explodes. Hurk meets up with Ajay and thanks him for his help, stating that, despite the fact Ajay doesn't have any tattoos, Ajay is "The Best Tat Bro Ever" out of the three.

If examined very closely, one can see that Hurk is slightly more built than the last game, having lost some weight. It can be noted that he may have been in Kyrat longer than residents, for instance, Willis Huntley.

Hurk returns again in Far Cry 5 as a Guns for Hire, helping The Resistance fight against Joseph Seed and his cult.

Hurk Jr. was born two prongs short of a fork, raised on TV dinners and soap operas in the absence of his father (Hurk Sr.) and his mother (Adelaide), who ran the family’s small business. Hurk Jr. tried his hardest to figure things out on his own. Thirty-five years later, the dude can barely zip his own fly. When Hurk Jr.’s mother ran away with another man, his father decided to enter politics and moved to their homestead in the Whitetail Mountains.

Hurk Jr.’s response was to spend the next few years backpacking around the world, from Rook Island to Kyrat, but he eventually found his way back to Hope County. Now Hurk Jr. lives with his dad in a fortified compound, “enjoying” the old man’s company and the many guns and armored vehicles on the property.

Hurk believes in only three things: poundin' brews, rockin' it all the time, and givin’ praise to the Monkey King who will eventually bestow him with great fortune.

Main Article: Where It All Began If you choose the "Resist" ending, after the nuclear detonation in the distance, Hurk is last seen running away.

During Lost On Mars, Hurk helps Nick Rye deal with the threat of alien invasion. Hurk also loses his body and gets his mind transferred to a robot body and becomes the Brobot.

Hurk survived the nuclear holocaust by living in a bunker in the company of his cousin Sharky, his mom Adelaide Drubman, her ex-husband Hurk Drubman Sr. and her current boyfriend, Xander Flynn. According to Sharky's diary, most of the time was spent partying and getting high, before the situation eventually escalated and Hurk Sr. left on day 820, stating he'd rather risk radiation than spend another day down there with them. After 3 years in the bunker, they eventually ran out of food, and while Adelaide and Xander went off towards Cuba, Hurk and Sharky decided to live their best Mad Max lives as Sharksidous Erectus and Hurkmungus.

Hurk became hostile to the Highwaymen when they took away his distillery, his girlfriend, his car, and attempted to take his baby. Ever since then, Hurk has sought to reclaim what he has lost and get revenge on the Highwaymen. The Security Captain tracked Hurk to the entrance of a Highwaymen controlled railroad tunnel. After Hurk blows up the Highwaymen guards, Hurk recruits the Captain to be his wheelman as he liberates his machine gun mounted car -- The Gifthorse. Hurk explained his car was booby-trapped which is why the Highwaymen brought it to somewhere remote in order to defuse it. Although Hurk tried to disable the trap, he failed to disarm it when they turned on the car forcing the Captain to keep the car in motion in order to prevent setting off the car's bomb. The Captain drove Hurk's beat up old car through motorized Highwaymen and bison until Hurk grew so frustrated with the car's slow speed that he tells the Captain to just let the car explode. Hurk is delighted by their teamwork and offers to become the Captain's Guns for Hire as they continue their path of vengeance. He also offers to build another Gifthorse car for the Captain that he assures will be much faster than the original.

As a Guns for Hire, Hurk utilizes a Rusty RPG-7.

Hurk does not appear in Far Cry 6, which makes it the first game since Hurk's first appearance in Far Cry 3 where he does not appear (if not counting Far Cry Primal). However, he sends Boomer to Yara along with a letter where he tells Boomer wasn't safe anymore in Hope County. Dani later on reads the letter and adopts Boomer, naming him Boom Boom.

Hurk as he appears in The Monkey Business key art

Hurk as he appears in Far Cry 3 Classic Edition

Hurk and The Harpoon Gun

Ditto, another variant with Wingsuit 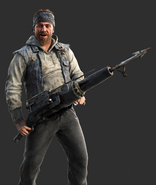 Another variant with The Harpoon Gun 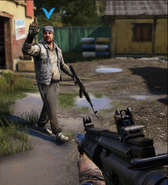 Hurk as he appears in The Hurk's Redemption key art

Appears in another key art 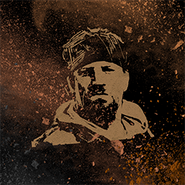 Hurk in the Brother In Arms Trophies's icon 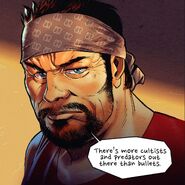 Hurk, in the Explosion Hazard comic.