Start a Wiki
watch 01:37
'Far Cry' Profile: Ishwari Ghale
Do you like this video?

“Ajay my son, I have so much left to say to you. But I'm out of time. So please, take me back to Lakshmana. The journey will tell you more than I ever could. I love you and I will always be with you."”
Ishwari Ghale


“A true victim, Ishwari Ghale was seduced by the wicked Mohan Ghale. Our beloved leader himself sought save her from Mohan's grasp. Sadly, she fled to the United States rather than embrace Pagan Min's benevolence.”
King Min's Kyrat


Ishwari Ghale is a character who is mentioned in Far Cry 4. Like Bhadra, she was once a Tarun Matara. Ishwari was married to Mohan Ghale and had with him a son, Ajay Ghale.

Nothing is really known about Ishwari's past other than the fact that she was Tarun Matara and became the wife of Mohan Ghale. In one of his journals, Mohan describes her as charming and intelligent. She became Tarun Matara; a spiritual leader, at some point in her teenage years. She and Mohan married in 1981 when they were still young, apparently against the wishes of both her parents and the temple as marrying the Tarun Matara was seen as 'bad luck'. Ishwari was incredibly supportive of Mohan during the early years of their marriage and there seemed to be genuine love between them. When unrest struck Kyrat, Ishwari and Mohan became the founders of the resistance The Golden Path, named for a dream Ishwari had where she saw herself and Mohan walking together down a golden path. When Mohan told Ishwari that he had named their rebel organization after her dream she smiled. In 1987 the Golden Path achieved its first small victory. In the absence of a royal heir it was decreed that the Tarun Matara would become head of state under a regent. The Kyrati Army would be reformed under Ishwari's command and all industry, finance, and transportation would be nationalized. Ishwari worked strenuously with Mohan in helping the rebellion and was considered as much of a founder and leader as he was.

By 1988, however, Ishwari's marriage with Mohan became strained by The Golden Path's continuing failure to raise a rebellion against Pagan Min. On top of disagreements on strategy, Ishwari felt ignored by Mohan and, despite wanting to be more involved in fighting, was prevented from doing so. Mohan retaliated against her persistence by sending her to spy on Pagan, hoping that by being so close to the source of their troubles would horrify her and convince her that she was not meant to fight. He was startled, however, to learn Ishwari was an excellent spy, so much so that Pagan began to deeply trust and respect her. Mohan told Ishwari to use this to her advantage and find out more. He even told her to bring a then infant Ajay with her to the Palace in order to bolster her cover story. However, Mohan's actions backfired when Ishwari's growing relationship with Pagan eventually flourished into an affair. Not many details are known about how their affair came to happen. She had a second child, a daughter named Lakshmana, with Pagan. Pagan says the last time he saw Ishwari, she told him she loved him, and a note she left for him before leaving Kyrat suggests her feelings for Pagan were genuine. Their affair came to a breaking point when Mohan Ghale, infuriated by Ishwari's betrayal, killed Lakshmana. Ishwari later killed Mohan in their home and fled with a three-year old Ajay to the United States where she would spend the rest of her life raising him before passing away from breast cancer in a hospice.

In the note left behind for Pagan, Ishwari states that she was leaving for numerous reasons. She says she was scared of Mohan, saying he's "out of control", and she wanted to raise Ajay in a different country, saying Kyrat "brought out the worst in people."[1] The note insinuates that she was planning on leaving without confronting Mohan and raises the question of how Mohan's murder came to pass. Willis suggested that Mohan tried to murder her for conspiring to leave with Ajay which, if true, means his murder was a result of self-defense on Ishwari's part. However, it could be theorized that Ishwari was planning to leave all along and right before Lakshmana was killed, simply omitting her as a reason in the letter, since Ajay was older.

Ishwari's life in America is relatively unknown, aside from the fact that she was usually stressed and worried about Ajay who was often getting himself into trouble. Ishwari never told Ajay anything about Kyrat, his father, or why she left. Pagan says he once came to the United States to visit Paul De Pleur's family and that he found Ishwari's home and considered visiting, but could not bring himself to do it. He tells Ajay he regrets this. Before she died, Ishwari's final wish was to have her ashes brought back to Lakshmana. 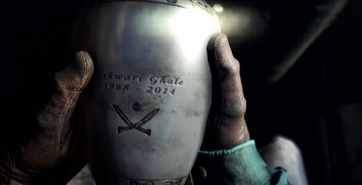 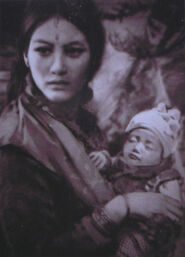 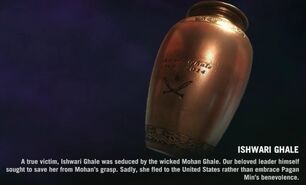 Retrieved from "https://farcry.fandom.com/wiki/Ishwari_Ghale?oldid=94015"
Community content is available under CC-BY-SA unless otherwise noted.