Jack Carver is an ex-United States Army Special Forces soldier (Green Beret). While his backstory and in-game objectives are diverse in Far Cry and Far Cry Instincts, they follow the main plot along with his ending and in-game events.

Jack, a former United States Army Special Forces soldier, has left his past behind and offers his services as a freelance boat charter in the South Pacific. He is employed by a reporter named Valerie Constantine to take her to a mysterious island, once occupied by the Japanese during the Second World War, intending to study its little-known World War II ruins. When Valerie goes ashore alone on a jet ski, Jack anchors down shortly before his boat is destroyed by a missile launched by an army of mercenaries occupying the island. After being washed up on shore and running for his life, he is knocked out in a close escape and wakes up in the ruins of an old fort. He is soon contacted via PDA by a man named Doyle, who appears to have vast knowledge of the island, the shady goings-on there, and the foes Jack is up against. As Jack attempts to rescue Valerie, who has disappeared with hardly a trace after the attack on his boat, he uncovers a horrifying scientific operation being performed by a disgraced former member of the major scientific community, brilliant yet with a twisted disregard for moral ethics, Dr. Krieger. He hired the mercenaries to guard the operation. His megalomaniacal vision was to replace humans with a race of godly super-beings, and rule the new Earth as their leader. But his experiments went out of control, and the tropical paradise became a living hell. It is now up to Jack to end the nightmare, and get himself and Val back to civilization.

Jack, an ex-Navy officer, offers his services as a freelance charter boat captain. He is employed by a reporter named Valerie Cortez to take her to the mysterious island of Jacutan. Upon arriving at Jacutan, Cortez borrows a water scooter from Jack and heads off on her own to investigate. Unworried, Jack decides to nap until she comes back. When he awakes, Carver is startled to find helicopters flying around his boat. They open fire and destroy his boat, forcing him to escape and swim for the shore. On the shore, Jack acquires a headset, and is directed by a mysterious voice who calls himself Doyle. As it turns out, Cortez is part of the CIA, and came to rescue Doyle. Doyle had been on a mission to expose the works of a mad scientist named Dr Krieger. Krieger, along with his right-hand man, an ex-Apartheid officer named Crowe, were attempting to develop a serum that would enhance the physical abilities of man, and 'unlock' hidden animal traits. Carver is thus recruited by Doyle to find and rescue Cortez, who has been captured by Crowe, and stop Krieger's nefarious activities.

During Jack's quest to rescue Val, Jack is captured by Crowe. Impressed by Jack's martial capabilities, Krieger experimented on Jack by administering his serum to him. This causes Jack to develop superhuman feral abilities which Jack utilizes to escape his captivity and defeat his enemies.

After the tragedy of Jacutan and the fall of Crowe, Dr. Krieger, and his men, Jack continues his life in financial debt, often at the 'bottom of a glass'. With the loss of his boat, Jack has since then kept his superhuman abilities dormant, until a beautiful woman named Kade convinces him to expedite an arms deal that will pay him enough money to buy a new boat. Jack later finds himself on a coastal Asian chain of islands that is being utilized as a pirate enclave. Jack and Kade arrive there by plane to facilitate an arms delivery for a group of pirates and the Micronesian government. As the pirates were unloading the plane's cargo while Kade was making a deal with the Micronesian Governor and the pirate leader, local rebels attacked the pirate enclave. The Governor and pirate leader are killed by a rebel warrior chieftain with similar feral abilities to Jack named Semeru. Because Jack is an outsider found at the scene of the crime, the Micronesian government and the pirates find Jack guilty of murdering their officials. Jack and Kade escapes the pirate enclave and finds sanctuary in Kade's safe house. Jack and Kade encounter CIA agent Harland Doyle, who made a deal with the Micronesian government to grant them amnesty in exchange for their help in destroying a rebel controlled refinery. The three accomplished their task, but the rebels retaliated by capturing Kade and Doyle is later murdered by Semeru. At the climax of the game, Jack goes after Semeru but is betrayed by his lover Kade, who aids Semeru in wounding Jack in order to save her own life. Jack manages to kill Semeru however, and confronts Kade for her betrayal. Jack chose to spare Kade and gave her the deal money, since her selfish self-preservation was such a human trait that even he would have considered doing the same thing in the past. After sparing Kade, Jack leaves Semeru's temple ruins.

The incident at Jacutan Archipelago changed Jack Carver's life forever. Jack has had little choice but to embrace the disturbing talents unleashed by Krieger's unique brand of folk medicine. Back at his home port in Micronesia, Jack thought he had finally found paradise. But when a gorgeous woman draws him in on a dangerous heist, their sun-drenched days take a chilling turn. Hunted for a murder he did not commit, Jack must draw on his most savage instincts to make his predators his prey.

Jack is mentioned by Hurk as he tells to Ajay about their "Tatoo's Bros".

He has a tattoo on his left forearm that says "Karma" in black letters. The boat Carver owns was bought from the government as its previous owners were killed in a 'freak' shark accident, is called Lady Karma. 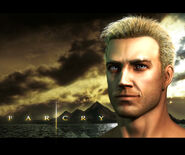