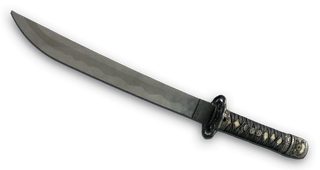 "The tanto is a Japanese dagger that was carried by the samurai. Wielding one of these will increase the damage dealt in melee combat."

"Japanese Tanto blades were once coveted items carried by the Samurai, shrouded in lore and god-like craftsmanship, but now they're used to spear smoked meat at chain restaurants."

The Japanese Tanto is a melee weapon found in Far Cry 3.

This Weapon is ONLY Available in Story mode, and will come in handy when out of bullets. It is unlocked by finding six Letters of the Lost, after which it can be equipped at a shop in the "melee" section. The weapon does approximately twice the damage of the machete. The Japanese Tanto does not take up a weapon slot, but replaces the Machete. It can kill most enemies with one strike, with the exception of a "Heavy" , which requires four strikes. The weapon appears again in Far Cry 3: Blood Dragon being Sgt. Rex "Power" Colt's only knife in the game. Despite real life Tanto blades being used primarily for stabbing, takedowns (which are entirely composed of stabbing) are identical to that of the machete while slashing is the primary difference between the two blades.