Jayma is a hunter of the Wenja tribe, and a secondary character of Far Cry Primal.

Jayma is a fierce, heavily scarred Wenja hunter who has spent her life in the wilds hunting the most savage beasts. She has survived longer than most hunters who are often maimed or eaten by the beasts of Oros. She has a few faithful Wenja hunters who walk with her, eager to learn from this old master. Jayma is in her twilight years and she is eager to pass on her experience to a worthy hunter. She has yet to find that hunter.

While searching for other members of the Wenja, Takkar met Jayma in the southern regions of Oros. At first he mistook the huntress for an enemy before he realized that she herself was a Wenja. Jayma spoke over the situation of her search for a brown bear for two days, the latter being scared off by Takkar, which prompted Jayma to call Takkar "Mammoth Feet". When he stated that he could find the bear faster than them, Takkar searched, killed and skinned the beast. This impressed Jayma, and even though she stated that her hunting group had tired the animal (thus making it easier for Takkar to kill it), she decided to join the rest of her tribe.

She soon settled in with the other Wenja, and begin to teach Takkar many skills that would be needed in order to survive. After Takkar manages to conquer every great beast of Oros, she decided that she had taught all she knew and head for the wilderness, but not before giving good luck to Takkar by saying that he has many moons ahead of him. Her ultimate fate after that is unknown.

Jayma is a veteran, seasoned huntress who has survived numerous encounters with many dangerous animals of Oros, and she has the scars to prove it. She is very skilled in handling weapons such as spears, slings, bows and arrows while hunting. 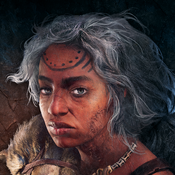 Ditto
Add a photo to this gallery
Retrieved from "https://farcry.fandom.com/wiki/Jayma?oldid=93034"
Community content is available under CC-BY-SA unless otherwise noted.