Pastor Jerome Jeffries is a Gulf War veteran and former gunnery sergeant who found religion, and has served as a Roman Catholic priest in Hope County for 15 years after the end of his military service in 2003. He met and became friends with Joseph Seed - the same man who would be his future enemy - as fellows in faith. Joseph convinced the pastor's flock to leave the church and follow his own, stealing the entire congregation, according to several characters in the game, such as John Seed. Jerome took it in stride until Eden's Gate locked down the entire county.

Jerome was beaten and left for dead. He survived, and vowed to protect the cult's intended victims from Joseph Seed who now calls himself "The Father". He became a key figure in The Resistance in Fall's End, determined to take Hope County back.

The town of Fall's End ben over taken by the Peggies, they ben outgunned and outnumbered, they are taken hostage. Until the Deputy liberates Fall's End Jerome is held captive by them. Jerome meets The Junior Deputy, and he brings them to the Spread Eagle Bar to meet the proprietor, Mary May Fairgrave.

The Junior Deputy is captured, "Cleansed" and put into a truck, and the Truck crashes and Jerome frees the Deputy. They then save Merle Briggs from the cult, escaping alive in a Helicopter.

After the deputy disrupts John's operation to an extreme degree - as Dutch earlier advised, "burn his whole damn operation to the ground" - John "invites" the deputy to confess their sins at the church in Fall's End, as their friends have ben captured

After the failure at the church to stop the deputy, Jerome tends to Nick's wounds, and Mary May helps the deputy catch up to the fleeing John Seed.

Main Article: Where It All Began Jerome is one of the Resistance members taken by Joseph Seed and controlled by Bliss in the final confrontation between Seed and the Junior Deputy. Depending on the player's choices, Jerome is either left under the control of Joseph's Bliss or freed just in time to witness the nuclear explosion that devastates Hope County.

Jerome appears to have survived the nuclear war, and now takes refuge with an unknown group of survivors in the ruins of Hope County.[3] Pastor Jerome suffered a crisis of faith and health scare after the Collapse. He was nursed backed to health by the local survivors and has pledged the rest of his life to keeping them safe and free from the Highwaymen.

Pastor Jerome along with Grace Armstrong and the Rye family helped build up Prosperity. Grace and Jerome tried to funnel in supplies to aid in Prosperity's construction through a train but the bridge couldn't hold the train, losing them a years worth of supplies. This loss forced Prosperity's homesteaders to look for outside help to build up Prosperity.

Pastor Jerome and a group of Scavengers have been raiding the Highwaymen's prisoner convoys but during one such raid, Jerome and his group were blindsided and he was captured. The Security Captain intercepted the prisoner convoy holding Pastor Jerome and liberated the pastor. The Captain and Jerome went on to liberate other Scavenger prisoners at the Rye & Daughter Aviation outpost. Afterwards, Pastor Jerome agreed to follow the Captain as a Gun for hire in order to fight the Highwaymen and put an end to Mickey and Lou's reign of terror.

As a Gun For Hire, Pastor Jerome is a berserker and utilizes a Rusty M133 shotgun. Leveling him up lets him throw Molotov cocktails and eventually load his shotgun with incendiary shells.

While both abilities allow him to deal frightening amounts of damage quickly, they also pose a considerable risk to the Captain and himself due to the fire's propensity to burn out of control. His short engagement distance also leaves him open to a lot of enemy fire. If the Captain is planning an attack where stealth is not required, Gina Guerra is generally the better choice as a raw damage dealer. 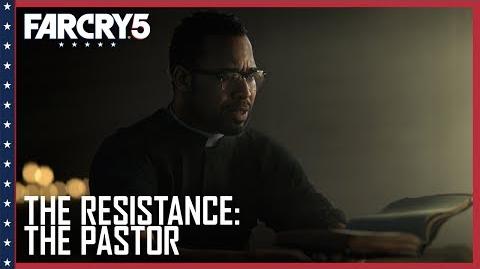 Jerome Jeffries after a fight

Jerome as he appears in Far Cry 5 key art 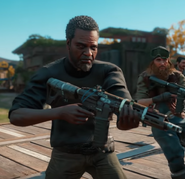 An older Jerome fighting alongside survivors after the nuclear war