Jessica "Jess" Black is a master huntress, and a Guns for Hire in Far Cry 5.

Jess’ parents were frequently out of work, so she moved around a lot and never had a proper childhood. As a result, trouble found her early: fistfights in the school hallways, late-night graffiti, dealing drugs, petty theft, and even setting fire to the principal’s car. Sick of her home life, Jess ran away to live with her badass Granny, a hard-core prepper and survivalist. No-nonsense Granny straightened her out fast by teaching her how to hunt and live off the land. For the first time ever, Jess finally had a positive role model and a sense of stability. After her Granny passed away, Jess, a changed woman, went back to living with her folks. Unfortunately, just when things were starting to look like they were going to be okay, Eden’s Gate showed up.

One night, while she and her family were sleeping, a Peggie henchman named The Cook broke into their house and abducted them. The Cook starved and tortured them relentlessly before finally brutally killing Jess’ parents in front of her. However, Jess escaped, and thanks to her Granny’s lessons, she now has the know-how to take down cultists and rescue others. She’s determined to save everyone she can and get revenge on The Cook. In a roundabout way, Jess found her true calling: killing.

Jess is one of the stealthiest companions in the game. When undetected, she can eliminate faraway hostiles completely quietly. During combat, she prefers long-to-medium-range engagements, attempting to stay back and put down enemies with lethal one-shot kills. If enemies get near, she will attempt to strafe away from them, and can also kill most of them instantly with a quickshot from her bow. She can also quickly change priority targets. This usually causes her to switch from aiming at a distant target to quickly turning and shooting someone who gets close to her. When she cannot eliminate the enemy in one shot and they get too close (usually only Angels are able to do this) she will switch to a hunting knife and slash at them. This makes her weaker at short ranges than other long-range specialists like Grace, who uses a machine pistol.

Occasionally during combat, Jess can also shoot a fire arrow. They cannot be specifically called to use, and the situation that will cause them to be used seems to be randomly decided. The fire arrow has a distinct look, resembling those used by the player. However, the arrows used by her are not already lit. Instead, she uses a lighter to set them on fire before use. When using the fire arrow, Jess will usually announce it with a specific voice line, warning the player of a burning enemy in the vicinity. The action of using a fire arrow is slightly longer than firing a normal one.

Upon liberating the Baron Lumber Mill, Jess will be freed from her cage, and the mission "A Dish Served Cold" will be available upon talking to her.

Jess asks the Deputy's help in killing a hated enemy of hers: The Cook.

As the Deputy confronts Joseph Seed at his compound, Jess, as well as the other Guns for Hires, have been hypnotized by the Bliss, and have captured Hudson, Whitehorse, and Pratt, holding them hostage.

If the "Resist" ending is chosen, she and the other blissed-out allies will fight against the Deputy, only for the Deputy to snap Jess out of her trance, and aids the Deputy in fighting Joseph.

If the "Walk Away" ending is chosen, the Deputy leaves the compound with Hudson, Whitehorse, and Pratt, as Jess and the other blissed-out Guns for Hire remain under Joseph's control.

It is unknown what happened to Jess after the nuclear holocaust. If she is still alive, she would be 44 years old.

Jess in the roster in Far Cry 5

Jess Black, as she appears when used as a Guns for Hire

Jess during combat with an unlit fire arrow. When firing one, she uses a lighter to start the flame

Jess with a fire arrow, ready to shoot 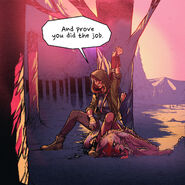 Jess, as she appears in the White Collar Job Live Event comic 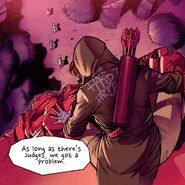 Jess Black with a half smile. Considering her past, it is good to see her smile.

Jess will sing what sounds like a commercial jingle if you hang out with her at Dobb's Dump for a period of time. She will sing the jingle sooner if you have a good fellowship going on with her. The better the fellowship the quicker she will sing. The jingle is "Dobb's Dumps, come dump your crap on us". It is very interesting to hear her sing after all the hardships she has endured.