In-game conversation reveals that a few years back, she and her partner Danny stopped at a diner to grab a bite to eat. As they got back into their cruiser with their milkshakes and continued their patrol, a truck went speeding past them. Hudson wanted to let it slip, but Danny wanted to pursue. When they caught up to the speeding vehicle and pulled them over, Danny told her to stay in the car because he just plans on giving them a warning. As Hudson's in the car drinking her milkshake, the suspects in the truck opened fire on Danny, putting two rounds into his chest before speeding off. Hudson got out and opened fire on the truck before tending to her partner, who was gasping for air as the result of a collapsed lung. She called the paramedics but they arrived minutes after Danny died. She continued to find something to blame Danny's death on including herself, the milkshake, even Danny, but came to terms that the only person responsible was the man holding the gun.[2]

If Joseph Seed is not arrested and everyone left early, it's unknown what would happen to Joey Hudson.

Though Joseph appears to go willingly when they make the arrest, the situation quickly escalates when the cult responds to the arrest with violence. In the ensuing chaos, she is kidnapped, while Joseph launches a manhunt to capture Marshal Burke and the Junior Deputy.

She is given to John Seed, who takes a special liking in tormenting her publicly in the cult's broadcasts. She is seen gagged with duct tape when John confronts and captures the Deputy a second time. When the Deputy is brought to John's bunker, John brings Hudson into the room tied to a chair and still gagged while he discusses his philosophy of atonement and the use of the word "Yes." He speaks to the Deputy about sin and then asks if Hudson or the Deputy should go first for the "atonement" process. The Deputy can either volunteer themselves by saying "Yes" or refuse, in which case John will have a violent outburst before choosing the deputy himself anyway. Either way, Hudson is taken from the room. While the Deputy escapes, Hudson is unable to be rescued.

The Quality of Mercy

Around the time the Deputy is having a dogfight with John Seed, Hudson manages to get free and kill a few of the cultists with a piece of serrated glass she wields like a knife. She runs into the Deputy and they nearly come to blows before she realizes her mistake. She then remarks that she won't leave before helping the rest of the captives. She and the Deputy work to release them, and then Hudson opens the silo so that the Deputy can escape before the bunker explodes.

After this, Hudson has a beer to celebrate with the Deputy, Mary May Fairgrave, Nick Rye, and Jerome Jeffries. She remarks that the Deputy has earned the right to be the leader against Eden's Gate, despite being of a lower rank than Hudson. As such, Hudson will follow any orders the Deputy gives.

She will then patrol Fall's End in the area around the Spread Eagle Bar wielding a shotgun, where she'll spend the rest of the game.

She'll return at the end of the game, having been captured by a blissed out Pastor Jerome. She angrily tells off Joseph and warns the Deputy to take down the Father.

If the "Resist" ending is chosen, she will be hypnotized by the Father's bliss before the deputy snaps her out of it, at which point she will help the deputy fight the Father. After the boss fight, Sheriff Whitehorse arrests the Father, a nuke goes off and the Junior Deputy, Hudson, Pratt, Whitehorse and the Father all enter a vehicle with hopes to make it to Dutch's bunker. Almost to the bunker, the Junior Deputy looks in the back of the car where Hudson yells about a falling tree. The Junior Deputy turns around but is too late to steer the car out of trouble and crashes into the tree. The Junior Deputy, after seeing Sheriff Whitehorse flung out of the windshield, looks in the back of the car after the crash to see Hudson and Pratt, either dead or rendered unconscious one last time before being dragged out by the Father.

If the "Walk Away" ending is chosen, she will get angry and argue with the decision, but will ultimately go with the rest of the group. In the car, she will continue to argue, only for Sheriff Whitehorse to reveal that he has no intention of actually letting the cult be, and is simply bluffing so they can come back with the national guard. However, shortly thereafter, "Only You" comes on the radio, and the Deputy starts slipping into their conditioning. The screens borders turn a bright, rage-filled red and then cuts to black immediately after. Although it is implied she, along with everyone in the car is killed by the Deputy. Her fate is unknown as the Deputy's condition may have been halted due to the brainwash only aimed at taking out the leader of the Whitetail Militia, Eli Palmer.

Since the "resist" option is canon and the Deputy's car crashes in to a tree, Hudson remains deceased.

Her uniform is a part of the female version of the 'rook' outfit. Her name tag is displayed on the front of the outfit.

A gagged Deputy Hudson tormented by John Seed in the cult's broadcast.

A tied up and gagged Hudson being tormented by John Seed.

John Seed noticing The Junior Deputy escaped while putting a still bound and gagged Hudson back in "her room". 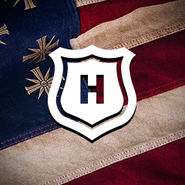 Hudson after being set free by The Junior Deputy.

John about to drag a struggling Joey Hudson.