Deceased, killed by The Junior Deputy

“John will use intimidation, faith and violence to secure resources vital to the Cult's survival - be it a home or a person.”
Promotional Description
Far Cry 5 Website

John Seed is one of three secondary antagonists in Far Cry 5 and Inside Eden's Gate, and the youngest of the three Seed brothers. While Joseph Seed is the defacto head of Eden's Gate, and Jacob Seed is in charge of security, John took to the public role of the church's legal representation, and more privately the cult's head of indoctrination and influence; serving as the herald of the Holland Valley region of Hope County as well.

John is a cult lawyer prepared to defend his family through the legal system. After the separation of the Seed family, he was adopted by the Duncan family, a wealthy and highly religious family from Atlanta. According to The Book of Joseph, the Duncans considered John's soul to be tainted, and they psychologically tortured John in confessing all and any sins through interrogation and a series of fundamentalist pastors. John came to understand that even if he had nothing to hide, he would need to make something up, and became extraordinarily skilled at disguising himself with what others wanted to see. As a result, he became skilled at psychological manipulation and used this skill to acquire secrets about others to his own advantage.

After attending a prestigious East Coast University and graduating at the top of his class, John became one of the fastest rising lawyers in Atlanta, inheriting a small fortune upon the death of his parents. He became extremely wealthy and well-connected, apparently portraying himself as a physical sign of success. Despite this, he disliked himself and society for what it had done to his childhood and wished for its destruction. By the time Joseph had contacted him, John was an associate at a major law firm undertaking the redevelopment of his childhood neighborhood in his hometown of Rome. After their meeting, John joined Joseph in his Vision under the role of the confessor of Eden's Gate.

Upon arriving at Hope County, John was able to use his fortune in acquiring land and farms without hassle, and quickly became acquainted with the county political and legal system.

Probably, if not the most sadistic out of the four family members, John Seed is not a force to be reckoned with by most. He is known as "The Baptist" and wants people to see their sins and what they have done, literally. He is known to engrave one's “sins” into their skin. When John was younger, he was taken into the kitchen by his parents and beaten senseless until all he could say was "Yes", which is his motto throughout the game. He is hinted at being a masochist and is certainly a sadist. In a cutscene, Joseph says that when he was a child, John was kind and loving, which made him an easy target for abuse and exploitation.

John is broadcasting that everyone can be free of sin with one word: "Yes." He reveals that he has Deputy Joey Hudson and announces to everyone watching has been selected to be cleansed and they don't have to do anything. They will come for them and welcome them to Eden's Gate.

John captures the Deputy again. He brings the Deputy to his bunker and puts them in a room with Deputy Hudson while both are tied to rolling chairs. There, he remarks that when he was younger, his parents taught him the power of the word "Yes," and would beat him until he learned it. He then remarks that everyone who undergoes the Cleansing has their sin tattooed on their flesh so that it can be revealed. He says that the Deputy, given that they quickly resort to violence and has no qualms with it, must surely be the sin of wrath. He then rips the Deputy's shirt open and remarks that it is time for atonement. The Deputy is asked whether they or Hudson should go first. The Deputy can volunteer themselves by saying "Yes" or refuse to respond, causing John to become enraged and flip a nearby table only to then pick the Deputy himself. Hudson is wheeled from the room, and during that time, the Deputy escapes.

Finally, John moves against the Deputy when they cause enough damage to John's operation. He captures Falls End and tells the Deputy to come to the church if they want to rescue his/her friends. While there, the Deputy is captured. When they awaken, John has finished tattooing wrath onto the Deputy's chest. He then has the Deputy brought forward for the atonement, where Jerome Jeffries, Mary May Fairgrave and Nick Rye are present. Nick has had Greed tattooed on his chest, and John forces Nick to place his hand on The Book of Joseph and swear to atone. Jerome refuses to comply at first but is struck until he does. Nick refuses, and John remarks on the nature of greed, stating Nick is really only out for himself. He then whispers something into Nick's ear, possibly about his family, and Nick changes his tune and agrees to atone. John knocks Nick down and cuts the tattoo off of Nick's chest before stapling the skin to the wall of the church. During the chaos, Jerome manages to switch The Book of Joseph with his bible. John then tries the same ceremony with the Deputy, only for the Deputy to pull the hidden gun from Jerome's Bible (which was actually a book safe). They fire on John, and the shot grazes him on the ear. John's troops carry him out to get him to his airstrip and instruct the rest to deal with the Deputy.

The Deputy, Jerome, and Mary secure the church. While Jerome stays to treat Nick's wounds, Mary drives the Deputy to John's airstrip.

The Deputy gets in a plane and chases after him, supported by Nick if the player chooses. After destroying John's plane, John parachutes to the ground, only to be fatally wounded by the Deputy. The Deputy approaches a severely injured John and grabs his key, John grabs his arm and asked what if Joseph is right and the world is on the brink. The Deputy rips the key off John's neck as John remarks that the Deputy isn't going to save anyone, and prays for God to have mercy on the Deputy's soul. He then succumbs to his wounds.

John's adoptive parents abused him greatly, which affected him well into his adult years. John believed that he - like all sinners - deserved his punishment and even held a degree of gratitude for them teaching him “the Power of Yes." John has made it his life mission to bestow that power on himself and others, initially through his own vices, until Joseph helped him turn that sadism into helping others find absolution and atonement so that they could be worthy of being sheltered from the Collapse and brought into Eden.

Even though John may have believed his personal mission in life was to save souls, he was highly sadistic and took a great deal of personal joy in the suffering atonement caused his victims. During the Cleansing, he cruelly drowned the Deputy further until Joseph reprimanded him. Joseph indeed admits that John was not perfect and even a monster at times, especially when compared to the rest of the Seed family, but Joseph dismisses it as only being because of John's childhood abuse.

Despite his cruelty, John believes Faith is much worse than him due to her abuse of her “Angels,” insinuating that John believes he treated his followers well.

John is a slim male with brown hair, blue eyes, and a medium beard. His body is covered in tattoos, the most notable being a large, scarified tattoo of the word "Sloth" on his chest. His usual outfit is a blue button-up shirt, black jeans, and a vest. In some of his propaganda videos, he is wearing a brown trench coat as well.

John as he appears in Far Cry 5 key art

John as she appears in Far Cry 5 another key art 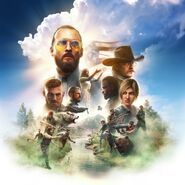 John with his brothers and adoptive sister in the background

"Do you mock the Cleansing, John?"

"Which one of you wants to go first?"

"My parents were the first ones to teach me about the power of yes."

"Place your hand upon the word of 'Joseph'"

John Seed is Wanted by the Cult, for being a Sinner 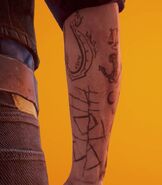 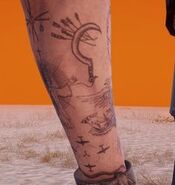 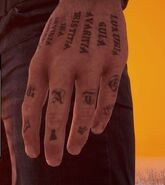 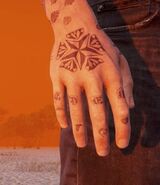 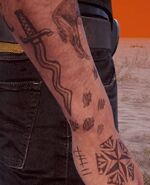 Retrieved from "https://farcry.fandom.com/wiki/John_Seed?oldid=90197"
Community content is available under CC-BY-SA unless otherwise noted.