The Judges are a superior variant of a wolf, that has been brainwashed through the use of Bliss and mind controlling music produced by Jacob Seed. The Wolves are mainly in the region of Whitetail Mountains. The Judges are captured by Wolf Beacons, that are located in different locations spread across the map. When the wolves are captured, they are shipped to the Elk Jaw Lodge, where they are modified with many types of surgeries, including injecting bliss. Finally, the Judges are taken to be trained at Breakthrough Camp and then used by the Project at Eden's Gate.

The Judge appears as an emaciated silver-haired wolf, with various patches of missing fur, revealing a scarred, bloodied skin. Also, the tail has been removed for unknown reasons. The Judge's face has also red substance on it, presumably being blood in the shape of a cross. 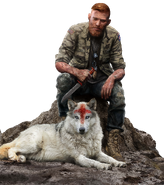 Jacob Seed and a Judge 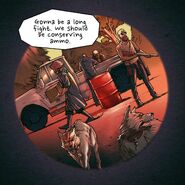 The Judges in Explosion Hazard comic.
Add a photo to this gallery
Retrieved from "https://farcry.fandom.com/wiki/Judges?oldid=98938"
Community content is available under CC-BY-SA unless otherwise noted.