“The story of the great warrior Kalinag and his journey into Shrangri-La is one of the most beloved myths in Kyrat. Sadly, some citizens mistakenly believe this tale to be true. These poor deluded individuals cannot see that the only true hero they need is the glorious King Min.”
King Min's Kyrat


Kalinag was a legendary warrior who stopped the Rakshasa from invading Shangri-La.

He was given the task by his king to find Shangri-La and return to Kyrat. Before him, many warriors were sent to do the task but none of them returned. Their bodies can still be found throughout Shangri-La, some granting bonus health bars upon interaction. The warriors that were killed had sacrificed their bodies for Shangri-La.

During the Shangri-La missions, you play as Kalinag and rid the 'paradise' of the Rakshasa intrusion. Kalinag is accompanied by a Sky Tiger that died protecting Shangri-La, but resurrected to 'gain an ally' by saving Kalinag's life, and to seek revenge on the Rakshasa for destroying its home and soul.

Soon after spinning Mani Wheels and freeing The Bells of Enlightenment, Kalinag and the Sky Tiger stumble upon the Leader of the Rakshasa; a massive bird-like deity which follows them throughout their journey to stop the invasion.

Later on, the two encounter an elephant cornered by a group of Butchers and Lurkers. After killing them all, Kalinag interacts with the elephant, turning it into a rideable painted war pachyderm. They then carry on with their mission, with the elephant as their new ally as Kalinag uses it to plough through the numerous hordes of the Rakshasa.

After meeting the Rakshasa leader for the third time, Kalinag uses a wind pad to launch himself into the air for him to chase it to the top of a stone spire. Kalinag and his tiger face off with the leader and proceed to kill it. After defeating the leader, the tiger jumps into its mouth and detonates itself, killing the hellbeast and freeing the land from the presence of the Rakshasa once and for all. The story ends with Kalinag delivering a monologue that states that 'Believing in something beyond yourself is a true paradise, and that Shangri-La lies inside all of us.' He then asks a painter off-screen if that is enough information to fill in the thangka, the same one scattered throughout Kyrat that Ajay Ghale collects and places on the picture frame in his Father's house.

In the mission 'Payback' within the main story, Yuma Lau blows a hallucinogenic powder into Ajay's face, making him hallucinate and perceive Yuma as Kalinag. At the end of the level, Ajay confronts "Kalinag" and they proceed to fight to the death, with Ajay being victorious. Ajay begins to stab "Kalinag" repeatedly, until he wakes up from his hallucination and discovers that "Kalinag" was actually Yuma, lying dead on the ground. 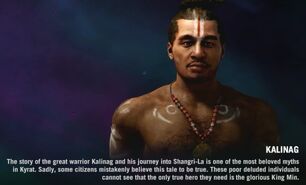 Retrieved from "https://farcry.fandom.com/wiki/Kalinag?oldid=94571"
Community content is available under CC-BY-SA unless otherwise noted.