Karoosh is a warrior of the Wenja tribe, and a secondary character of Far Cry Primal.

Karoosh is a powerful, gregarious Wenja fighter. He suffers over the death of his only son. He had dreams of his son fighting alongside him for many years. Instead, his son was killed by Mog, an Udam warrior. Karoosh lost his eye trying to defend his son. Now he vows revenge. He is hunting for Mog and slicing through all Udam that come in his path.

For Karoosh, his revenge journey is a joyous adventure. It's in honor of his dead son. This quest for Mog is the closest Karoosh will ever get to fighting alongside his son and he is determined to live the adventure to its fullest. And he will not rest until Mog is dead.

When Karoosh and Mog meet in a cave, the two fight violently. Then, the warrior eventually kills Mog but is critically injured. But he luckily survives after returning to the village.

Karoosh is a powerful and an experienced warrior, as he is able to kill many Udam that gets in his way in order to avenge his son. His preferred weapons in battle are spears and clubs. 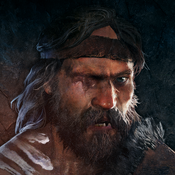 Ditto
Add a photo to this gallery
Retrieved from "https://farcry.fandom.com/wiki/Karoosh?oldid=93033"
Community content is available under CC-BY-SA unless otherwise noted.