Lakshmana Min was the daughter of Pagan Min and Ishwari Ghale, and was also Ajay Ghale's maternal half-sister. She was an innocent victim of the conflict between the Golden Path and Min's regime, shot in the head by Mohan Ghale before her second birthday. Mohan took to the news of her existence harshly, seeing Lakshmana as a living incarnation of Ishwari's betrayal to him. Ishwari's dying wish was to be taken "back to Lakshmana". Typically Lakshmana is a male name, however, it is also the name of one of Krishna's eight wives in Hindu mythology.

Absolutely nothing is known about Lakshmana due to her very early death. She has the same symbol on her forehead as Amita which Ubisoft states is cultural tradition amongst Kyrati women. Her clothes bear the same peacock emblem that Pagan wears on his jacket lapel when he and Ajay first meet, but the symbol's significance is unknown. It is implied that Lakshmana's death was the primary reason why Ishwari killed Mohan.

Ubisoft has confirmed during Q&A that Lakshmana is definitely dead, and that there is no possibility of her having survived.[1] And if that wasn't enough, by the end of the game, if Min is spared, then he tells Ajay of who Lakshmana really is and how she died, and what happened afterwards.

She later on appears on Pagan Min's path named Pagan: Control, alongside her mother Ishwarinand half-brother Ajay, as an illusion and mocking voice, playing flashbacks upon her dad's mind 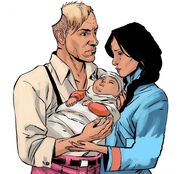 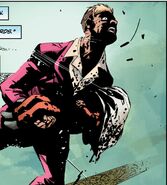