The M249 machine gun is one of the most powerful weapons a player is able to carry in Far Cry and the remaster. It offers a high rate of fire and is deployable in a large number of places. However, it suffers from low automatic fire accuracy, requiring the operator to focus fire in one area or on a single target, using fast bursts to be at its most effective.

Until Crowe is killed, the M249 was used exclusively by him, especially when fighting Jack Carver. Upon being killed, his weapon can be obtained, as well as from a few other mercenaries who wielding M249s later in the game.

The M249 is one of the best weapons obtainable and can counter multiple enemies, including assailants with high health. It functions much like an assault rifle-style weapon, but with a 100 round belt and a high cyclic rate of fire. Combined with the decent damage, and when used by someone who can handle and work with the fire rate and combined recoil, it presents a deadly foe in the right hands. What it lacks for an optical sight or grenade launcher, it makes up in sheer rate of fire.

It is advisable to fire from the crouched or prone position to increase accuracy and reduce the enemies' ability to injure the player with return fire.

In Far Cry Classic, the M249 has been given a new model, which is far more detailed and now has a full stock, which was absent in the original game. Like all non-scoped weapons in the remaster, it is now possible to use the weapon's iron sights for more accurate shooting.

The M-249 SAW is one of the two light machine guns in Far Cry 2, the other being the PKM. This LMG is available after completing the first Weapon Shop mission in Act 2 and starts to appear in enemy hands during the same act. It is superior to the PKM in terms of accuracy and rate of fire, although has less recoil and a lower reliability. Enemies will begin to carry this weapon in the place of the PKM around midway through the Faction missions in the Bowa-Seko region. The M249 also appears in Act I as a mounted gun. During Act 1, all enemy Assault Trucks have a mounted M249 until Act II, where it is replaced by the M2 heavy machine gun and Mk 19 grenade launcher.

The M249 is superior to the PKM in some aspects, as it is more accurate and has a higher rate of fire. To some extent, the M249 can be used in close quarters combat. The M249's main disadvantage is its low reliability rating. It is recommended to purchase the reliability upgrade in order to counter this weakness.

When the Reliability Upgrade is purchased for the M-249 SAW, it will start to jam somewhere between the 525th shot and the 1350th shot and will eventually break on the 1500th shot (three full bandoliers х 500 rounds). 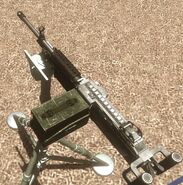 The M249 appears again in Far Cry 5 and Far Cry Arcade, being classified as a light machine gun this time.

The standard variant, the M249 appears in Far Cry 5 and Far Cry Arcade.

It can be fitted with a suppressor, optical sight, extended magazine, and a skin.

"River of Blood", the Prestige skin

The Prestige variant, the Militia is styled cosmetically after the Whitetail Militia.

It is identical to the standard M249, and can be fitted with optical sights, a suppressor, and an extended magazine. However, due to its nature as a Prestige item, it is not able to be given a skin, nor used in Far Cry Arcade.

The M249 returns in Far Cry New Dawn. Unlike most weapons, all variants of the M249 seem relatively unchanged from their previous counterparts.

The "Hurk's Wrath" M249 is a Rank 2 weapon. It sports a yellow and red paint job with flame decals, although its handle and ammunition box are colored black. It also has a scope on top of the gun itself.

The "Gardener's Fury" M249 is a Rank 3 weapon. it sports a dirty grey and black paint job with a dark grey coloration on the ammunition box. The handle is black in color. It also has a scope on top of the gun itself.

The "Graffiti" M249 is a rank 3 weapon. it has a black paint job with several white graffiti-like markings all over its body and on the tip of its barrel. There is also a scope on top of the gun itself.