“Loves the action. Not exactly an intellectual, but he can hold his own.
Joined Marines and made Corporal. Did a couple college years then re-enlisted. Made Gunny Sergeant, then went private-sector.
Used to be married to some Egyptian woman. Busy guy for 28 years old.”
Journal Description
Far Cry 2

Depending on which character you choose to play as, Marty can appear in either Leboa-Sako or Bowa Seko. If you play as Warren, Josip, Paul, or Quarbani, Marty will appear in the northern district. If you play as Andre, Hakim, Frank, or Xianyong, he will appear in the southern district. He is also considered the "default" character as his picture is seen in numerous previews, reviews, and in-game trailers of Far Cry 2. In addition, he appears in the front cover of the game.

During the progress of the game, Marty may ask you to do a couple of favours for him. 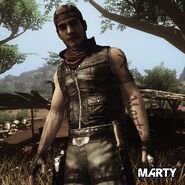 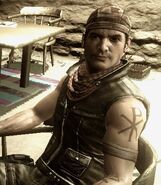 Alencar at Mike's Bar
Add a photo to this gallery

Retrieved from "https://farcry.fandom.com/wiki/Marty_Alencar?oldid=91434"
Community content is available under CC-BY-SA unless otherwise noted.