View source
watch 01:20
Far Cry 5: Official The Resistance: Mary May Trailer
Do you like this video?
Play Sound

Mary May Fairgrave is an ally and local resident of Fall's End, Hope County, Montana during the events of Far Cry 5.

The current owner and bartender of the Spread Eagle Bar, Mary May desires revenge against the Seed Family and Eden's Gate for destroying her family, and driving her father to suicide. With little left to lose, she decides to help The Junior Deputy and The Resistance at any opportunity.

Mary May seeks answers for her father's death and brother's turning to the Project, and heads for the compound. Her plans and conversation with Earl Whitehorse were leaked by a member of the Sheriff's office to the Project, likely the operator Nancy. She is run off the road and crashes, then runs into the woods to escape pursuit by John Seed. As she travels, she finds brief shelter with a father and son who are herding sheep in the mountains.

The weary, dissipated hunter Will Boyd is tasked with finding her, and tails her through the woods ahead of John and his men. On the way, his companion, Lonny, beats the young sheepherder and threatens his father.

Mary May eventually locates Drew and he takes her to the compound. There, she separated from Drew, and forcibly baptized and tattooed with "Envy" by John. She is also drugged with Bliss.

Will, as a former friend of the Fairgrave family, has decided to help her escape rather than keep her imprisoned, and offers to help her while she is waiting to be tattooed. To have a chance at getting Drew out she refuses, and he goes to extract her brother.

In the chaos of their escape, Mary May drugs John with Bliss and runs from the compound, where Jerome Jeffries picks up her and, eventually, Will and Drew. The quartet hole up briefly at Will's old home before John and the cult find them once again.

Will and Jerome take to the hills to keep watch while Mary May walks out with her brother, a gun to his back. There, Drew ultimately reveals that he, and not John or the cult, killed their father Gary. In shock and grief, Mary May kills Drew, and realizes that the cult had wanted to force this encounter to the point of death for Drew.

John informs she now has a secret the Project can use against her at any time, and leaves. Mary May returns Fall's End to bury Drew, and protect her secret, and to the Spread Eagle. There, the sheepherder's son comes in to see how she is doing, and to let her know he and his father are leaving but will be telling anyone who cares about what is happening in Hope County, so that help will come. The pair agree that while things are difficult, they must try to make them better.

She first meets the Deputy during the liberation of Fall's End. Once rescued, Mary will grab an assault rifle and help remove the remaining cultists from town. Afterwards, she pulls the plywood off of her boarded-up bar, and gets the place back in business. Mary pours shots for herself, Jerome Jeffries and the Deputy, and remarks that she and Jerome will keep the town humming as a base while the Deputy deals with John.

She will tell the Deputy that the cult has stolen her late father's truck, The Widowmaker. With its mounted machine guns and large girth, it would be of great help to the Resistance, in addition to her personally. When the Deputy brings it back, she thinks back fondly of the times she would watch her father bring the truck in. She then remarks if the Deputy needs to use the truck against the cult, the Widowmaker is ready, the Deputy doesn't even need to ask to use it.

Mary is recaptured by John when he reinvades Fall's End after the Deputy deals a lot of damage to his operation. During the chaos in the church, Mary grabs her rifle and helps the Deputy and Jerome secure the church while John escapes. After the town is safe, she hops in a van to pursue John with the Deputy manning the mounted guns to clear a path.

When she reaches John's airstrip, she and the Deputy secure the grounds. Mary charges that she'll keep the grounds clear while the Deputy chases after John in another plane.

After John's death and Deputy Hudson's rescue, Mary grabs some beers to celebrate with the Deputy, Hudson, Nick, and Jerome. She declares that the Deputy will lead in Fall's End and beyond, and everyone will follow orders to get the cult out of town.

During the final confrontation with Joseph Seed, Mary - like many of the others - falls under the command of Joseph through Bliss intoxication, until the Deputy releases them when he decides to resist.

After the Collapse, Mary May set out to keep Fall's End going as a liveable location. She did not even seek shelter in a bunker. However, the long years, the radiation, and the eventually fruitless effort of trying to rebuild her home town took their toll on her health; and therefore she died before the arrival of the Captain. A note left behind Grace Armstrong at Roughneck's Crag (formerly, Steele Farm) confirms that Mary May died after the Collapse. Another note written by Tracey Lader and left near what once had been Fall's End reveals even more information about her fate.

Mary in the trailer

Mary May artwork, with background

Mary May in Spread Eagle Bar

Mary May in another Far Cry 5 key art 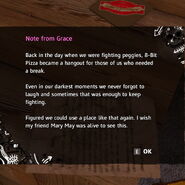 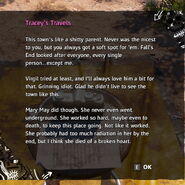